Why Bipartisan Support For Policing Reform May Be In Danger 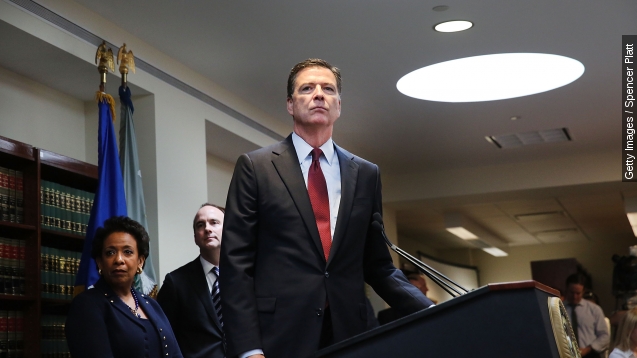 "In today's YouTube world, are officers reluctant to get out of their cars and do the work that controls violent crime?" FBI Director James Comey asked during a talk at the University of Chicago.

FBI Director James Comey is pitting himself against President Obama on the so-called "Ferguson effect," and it could threaten bipartisan support for policing reform as presidential candidates take up the issue.

"I've been told about a senior police leader in this country who urged his force to, 'Remember that our political leadership has no tolerance for any of you being involved in the next viral video,'" Comey said.

"The Ferguson effect" is the idea that increased scrutiny on police is discouraging officers from effectively policing, leading to higher rates of violent crime.

It's an idea that the president has pushed back against. (Video via International Association of Chiefs of Police)

"We've got to resist the false trap that says either there should be no accountability for police or that every police officer is suspect no matter what they do," President Obama told the International Association of Chiefs of Police.

And it seems at least some police chiefs are on the president's side rather than Comey's.

"To his way of thinking, a chill wind across the deck of American policing through the YouTube effect, was causing some officers not to engage the public as aggressively as they may have. ... Candidly, more police chiefs than not did not perceive that as a statement we could agree with," former New Orleans Police Chief Ronal Serpas told NPR. (Video via YouTube / Wayne Workman)

The president has put an emphasis on bipartisanship on this issue, so "sides" developing at all is something he likely wants to avoid. (Video via The White House)

Some aspects of law enforcement reform, like minimum sentencing, have received bipartisan support. (Video via C-SPAN)

But if supporting reform is cast as not supporting police, that bipartisanship could evaporate.

"Because of a lack of support from politicians like the president of the United States, that police officers are afraid to get out of their cars, that they're afraid to enforce the law," Republican presidential candidate Chris Christie said during the CNBC debate.

"We've had a number of police deaths in the last few weeks. It hasn't received nearly as much attention from this White House, or quite frankly from the media, that some of the civilian shootings have received," Republican presidential candidate Marco Rubio told Bill O'Reilly.