Why Assad Wasn't Worried About A Coup When He Left Syria 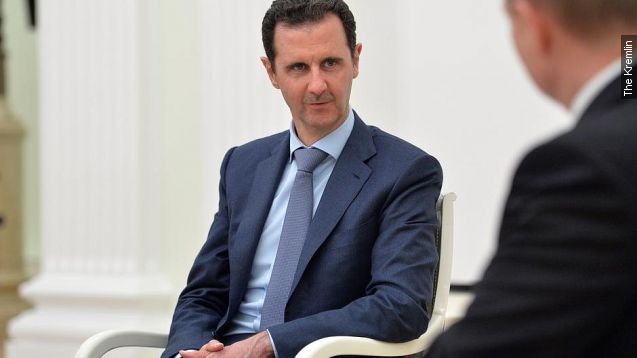 SMS
Why Assad Wasn't Worried About A Coup When He Left Syria
By Jake Godin
By Jake Godin
October 22, 2015
Syrian President Bashar al-Assad recently left the country for the first time in years. Experts speculate that concerns of a coup had kept him home.
SHOW TRANSCRIPT

When Syrian President Bashar al-Assad visited Moscow for a day, it revealed something about what's going through his head.

He didn't think a coup would happen in his absence.

Which isn't the highest standard of confidence in his regime, but it's one he couldn't meet for four years. (Video via Presidency of the Syrian Arab Republic)

Assad hasn't been out of Syria, at least not publicly, since his country started falling apart in 2011. (Video via Presidency of the Syrian Arab Republic)

Some, like analysts at The Soufan Group, saw him not leaving Syria as a way to prevent an assassination or coup — if you're out of the country, both of those are easier.

But Assad's trip to Moscow, although discrete, shows that he's confident neither will happen.

So why didn't a coup happen? Well, that's hard to say for sure, but it's likely Assad's soldiers are just too loyal to mutiny.

Assad built the core of his army from members of his own religious sect — the Alawites.

Members of the Alawite community have been threatened on numerous occasions by some of the more extreme rebel groups in Syria.

But there's something else. Assad's managed to retain officers by creating what one analyst calls "Officer Ghettos."

The state-subsidized housing allows Assad to tie his officers and state workers to the regime by essentially making them and their families dependent on it. (Video via SANA)

Not to say defections aren't happening on the infantry level — they are. But, as we've seen, that hasn't been enough to topple Assad's regime.