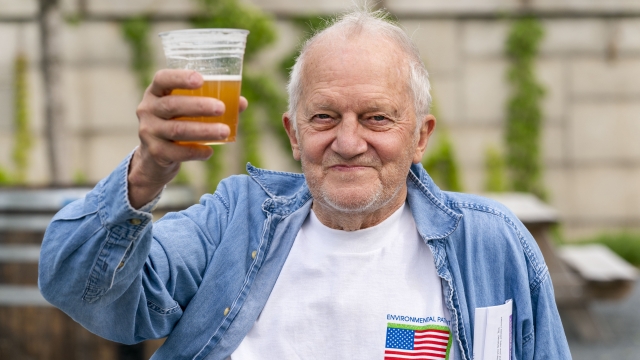 The stories of numbing life through the buzz of alcohol are seemingly endless. Between April and September of 2020, a University of Arizona study found severe alcohol dependence skyrocketed 400%. Millions have shared their stories of coping with their confusion, desperation and isolation by drinking. But each of these are comeback stories, too, of finding happiness and health by swearing off alcohol.

That can seem like a big ask considering alcohol is ingrained in many of our everyday lives: at brunch, family gatherings, work events and even baby showers.

Some are taking a hard look at why.

"There's a growth in the kind of the movement about mindful drinking or sober curious," said Chris Becker, Better Rhodes founder.

Journalist Ruby Warrington coined the term "sober curious" in her 2018 book, as she encouraged millions to question the role alcohol played in their lives. And there’s proof that zero-proof is hitting the mainstream. A Nielsen survey last year found sales of booze-free drinks skyrocketed by 113%. When Nielsen asked people why they were drinking less, top responses included health and wellness and shifting interests. In another survey 37% of people worldwide said they bought no or low alcohol products to avoid the negative effects.

"No more passing out on the floor, getting dizzy, or anything like that. I love being able to drink a non-alcoholic beer and drive to the grocery store later that night," said Kyle Prindiville, manager at Awake Denver.

According to Gallup, college-age Americans are leading the charge among the sober curious movement. A decades-long study appearing in JAMA Pediatrics found the share of college students who don’t drink alcohol jumped from 20 to 28% between 2002 and 2018.

As for why? Ari Eastman, host of the podcast "Sobrietea" believes younger generations are prioritizing wellness and health, after spending so much time drinking to avoid anxiety and other emotions.

"A lot of people are realizing if there's all these external factors going on that I can't control, what are the things I can do to make myself feel better and give myself a, you know, a fair chance at having improved mental health?," said Eastman.

Market researcher David Jurnegon thinks the consequences stemming from the surge of drinking during the pandemic are forcing people to cut back.

And with all the bubbling interest, drink market analysts predict the no-to-low alcohol sector will grow 28% by 2025. But major brands like Budweiser say they've offered zero-proof beverages for decades.

"Consumers are looking for high quality, great tasting options from brands they can trust. They still want the camaraderie of beer, but without the alcohol. And then they're also looking for more variety," said Lucas.

Cutting out alcohol is a move some experts welcome — like Jurnegon, who is alarmed by the rise in drinking during the pandemic, and the harmful effects it can have on health.

"Alcohol is a carcinogen. And furthermore, your body processes alcohol, right, it turns into acetaldehyde, which is also a carcinogen. Alcohol is causally linked to cancers in seven parts of the body," said Jurnegon.

But Jurnegon says as popular as the "sober curious" movement may be, zero-proof drinks are just a sliver of the American alcohol market.

"Alcoholic beverages in the U.S. are about a $261 billion market. No alcohol beverages are at about $331 million. That is less than 1/10 of a percent," said Jurnegon.

Jurnegon also worries about underage teens and adults, with the packaging of zero-proof drinks looking virtually identical to alcohol. But Lucas emphasizes Anheuser-Busch's products are only for the 21-and-over market.

"We sell them as if they're alcoholic beverages and they are governed by the Beer Institute ad and Marketing Code, which means that we are focused on making sure that they are only marketed to people who are of legal drinking age," said Lucas.

Ari Eastman knows what it’s like to get sober, and she knows that liquor or beer replacements may not be the best option for people trying to come back from addiction. But for those who just want to see what a sober life could be like, Eastman says curiosity is one step closer to clarity.

"Anyone can make the decision to stop drinking. A lot of young people are really tapped into wanting to make an impact and wanting to, like, have whatever their legacy is," said Eastman.

A legacy not drowned out by the buzz.