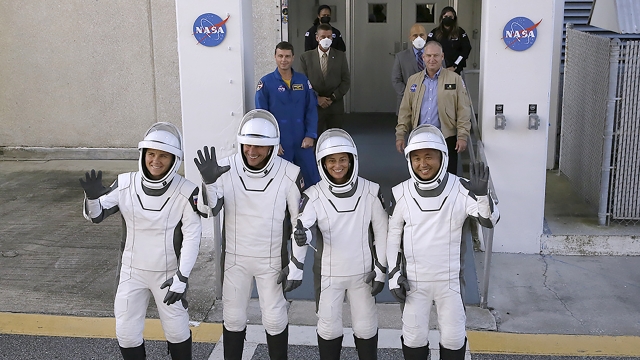 America is on a mission back to the moon.

To understand why we're going back for the first time since 1972 we need to remember why we went there in the first place.

During the Cold War America was in a fierce space race with the communist Soviet Union. In July 1969 the U.S. declared victory.

Geza Gyuk is the director of astronomy at the Adler Planetarium.

Now, more than five decades later, NASA says its current Artemis Program is about exploration, not about politics.

"We're going back to the moon, and this is why," said Bill Nelson, an administrator at NASA.

The Artemis Program, which began with an un-crewed rocket launch, will eventually set the stage for what NASA hopes is a long-term presence on the moon. The agency says the mission is three-fold: scientific discovery, economic opportunities and inspiration for a new generation. But the agency stresses the moon is really a solar system steppingstone.

"I just want everybody in the room and everybody watching to remember our sights are not set on the moon. Our sights are clearly on Mars," said Capt. Reid Wiseman, chief of the Astronaut Office at NASA.

NASA and SpaceX sent Nicole Mann to the International Space Station as part of the Crew-5 mission.

NASA is bullish on the red planet and says the Artemis Program can help launch a growing space economy — one that will build new industries and create new jobs.

And that potential economic benefit is key because each Artemis mission will cost more than $4 billion. The price tag for the whole program through 2025? $93 billion.

Some NASA critics argue the agency is already being outpaced by private space companies building rockets that are better and cheaper.

"Right now, we're seeing the last gasp as sort of the Apollo approach to building giant rockets. And meanwhile, you know, 1,000 miles to the west, Elon Musk can build his starship so cheaply that he blows them up and he puts a blooper reel out," said Keith Cowing, an editor at NASAwatch.com.

But NASA believes the costs will help it achieve a third goal — inspiring a generation too young to have witnessed the Apollo era.

"All of us in the astronaut office are in one way or another influenced by those iconic images of our Apollo astronauts exploring the moon," said Lindgren.

And this time the missions will be more diverse.

NASA says the Artemis 3 mission will land the first woman and first person of color on the moon. NASA wants it to happen in 2025.

"We want every kid in America to look at our poster and say, oh, I see myself in that," said Wiseman.

And right now the public is behind it. According to an Economist / YouGov poll from 2021, a majority of Americans favor the U.S. sending astronauts back to the moon. And a Gallup poll from 2019 showed a record number of Americans say the benefits of the space program justify its cost, helping to solidify support for a return to the moon and beyond.