Why Are Thousands Of Migrants Stuck In Tijuana? 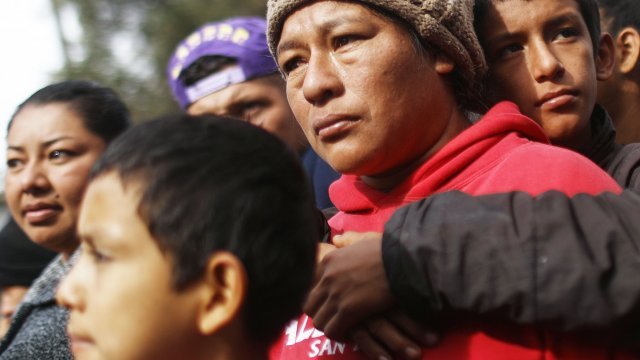 SMS
Why Are Thousands Of Migrants Stuck In Tijuana?
By Ben Schamisso
By Ben Schamisso
December 12, 2018
At the port of entry near Tijuana, the U.S. currently allows 40 to 90 migrants to seek asylum daily. Here's why this "metering" policy is contentious.
SHOW TRANSCRIPT

By now, you've probably seen this footage from late November of people in Tijuana rushing to the U.S. border. The incident sparked a lot of conversations around the use of tear gas by border agents and the use of projectiles by some migrants.

But not much has been said about why migrants were protesting in the first place: the fact that thousands of them will have to wait weeks, maybe months, in Mexico before getting to apply for asylum.

That's because at the border crossing near Tijuana, the U.S. currently allows only around 40 to 90 people to apply for asylum on a single day. That rationing policy, known as "metering," is pretty controversial.

Critics argue that metering is a convenient tactic for the Trump administration to slow down the asylum process for Central American migrants who have to wait for their turn in temporary shelters or camps.

An ongoing lawsuit against the government alleges that since 2016, border agents have frequently turned asylum seekers away by using a variety of "intimidation and coercion" methods. It also accuses the U.S of implementing the metering practice in collaboration with Mexican officials to "intentionally" complicate the asylum process "through unreasonable and dangerous delay."

But U.S. Customs and Border Protection, or CBP, told Newsy by email that metering is needed "from time to time" simply because of limited detention space and resources. The agency also stresses that "no one is being denied the opportunity to make a claim of credible fear or seek asylum," and that it "processes undocumented persons as expeditiously as possible."

The U.S. Department of Homeland Security's website also says it's a "myth" that the U.S. is turning away asylum seekers at ports of entry.

"I'm willing to believe that maybe someone has to wait a few hours if there aren't enough asylum officers, but certainly not for months as it currently stands," said Angelo Guisado.

Angelo Guisado of the Center for Constitutional Rights is one of many attorneys representing 13 asylum seekers in the lawsuit against CBP. He says the fact that the long waiting list in Tijuana is informally managed by asylum seekers proves how disinterested the U.S. government is in speeding up the process.

"Doesn't it sound a little ridiculous to you that the United States is implementing a wait-list system run by asylum seekers themselves in an actual physical notebook? This is a government that has allocated $41 billion to the Department of Homeland Security. And this is their best response to an international humanitarian crisis. it's laughable."

CBP actually says it needs more funding from Congress to be logistically ready to process large groups of migrants arriving at the border at once.

But instead of asking for that additional funding, the Trump administration may have found another way to free up government resources and detention space. The White House and the Mexican government are reportedly discussing a "remain in Mexico" plan that would force some asylum-seekers to stay in Mexico while their cases go through the U.S. court system.