Why Are These Qualified Officials Compared To Cheerleaders? 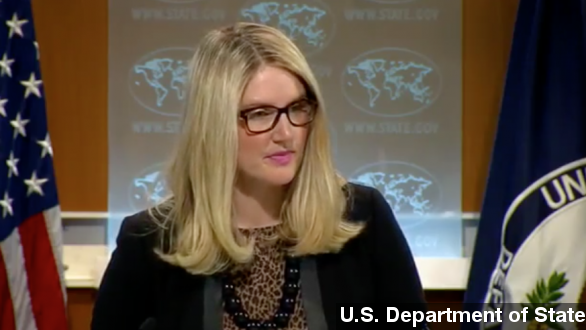 They're not only two of the most visible members of the Obama administration, Marie Harf and Jen Psaki are often the most lampooned. (Video via U.S. Department of State)

"The State Department, which is being manned or womaned by all the young chicks on the pep squad who couldn't make the cheerleader team," Dennis Miller said on Fox News.

National Review takes the name calling a step further, likening Harf and Psaki to Lucy and Ethel, adding they're "the only two under the impression that 'Legally Blonde' was a documentary."

A little background here. Last week, Harf made these comments about fighting terrorism:

"We cannot win this war by killing them. We cannot kill our way out of this war. ... We can help them build their economies so they can have job opportunities for these people."

Conservatives pounced. But here's why that's a little strange, coming from the right.

"We cannot kill our way out of this war," Harf said.

"We can't kill our way out of this mess," Mitt Romney said during a 2008 presidential debate.

And what she said about how reducing poverty can reduce terrorism?

"We fight against poverty because hope is an answer to terror," President George W. Bush said in 2002.

"When you listen to her, I swear to God, it's like listening to a 'Saturday Night Live' parody of a press secretary," former New York City Mayor Rudy Giuliani said on Fox News.

"This is a little poli sci major who somehow got a little job in the State Department," Fox News host Eric Bolling said.

That "little poli sci" major he's referring to, by the way, has an impressive resume with stints at the CIA and Defense Department before coming to State. Psaki has a long list of credentials as well.

Their defenders on the left say there's an element of sexism at play here. Age might also be a factor.

Whatever the reason for the criticism, it didn't keep Psaki from getting a promotion. The White House has tapped her as its new communications director.