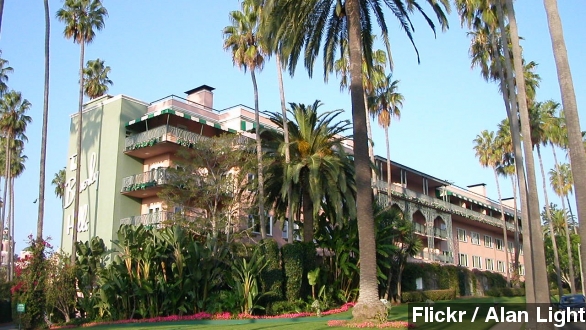 By Briana Koeneman
May 7, 2014
A number of people, including celebrities Jay Leno and Ellen DeGeneres, are boycotting the Beverly Hills Hotel because of its ownership.
SHOW TRANSCRIPT

For decades the Beverly Hills Hotel has been a popular hangout for Hollywood's biggest names. (Via Flickr / Alan Light)

But now, several celebrities and even the city's mayor are refusing to step foot inside it — not because of the iconic hotel itself, but because of who currently owns it.

"Protesters are targeting the 102-year-old hotel because of its owner, the sultan of Brunei. He recently adopted Islamic law in that country, allowing the deadly stoning of anyone convicted of homosexuality or adultery." ​(Via KNBC)

Sultan Hassanal Bolkiah's government reportedly started rolling out this new law last week in the predominantly Islamic nation on the island of Borneo in southeast Asia. (Via CBS)

CNN reports Sultan Hassanal Bolkiah's government also runs the Brunei Investment Agency. The investment group owns the Dorchester Collection, which is made up of a total of 10 hotels, including the Beverly Hills Hotel and the Hotel Bel-Air.

And a number of celebrities, including Sharon Osbourne and Jay Leno, are protesting the hotel because of the controversy.

LENO: "It's not a political issue. This is not something that's debatable. It's people being stoned to death. Hello?" (Via CNN)

Leno and his wife are just two of the people who have decided against making appearances and holding events at the hotel starting this week.

And, according to CBS, at least nine major events scheduled to be held at the Beverly Hills Hotel have been cancelled, including an annual pre-Oscars party.

The issue has caught the attention of the Beverly Hills City Council as well.

"We are condemning those and standing for those who don't have a voice." (Via KTTV)

But Beverly Hills Hotel employees are taking a different stance on the situation, saying a boycott of the hotel is only hurting the hundreds of people who work there.

Still, hotel representatives offered protesters cookies and water as they gathered across the street from the hotel Monday. (Via KABC)

Although a spokesperson for the U.S. State Department says a boycott among private citizens is an acceptable way for them to express themselves, it hasn't taken a position on the Beverly Hills Hotel protest.