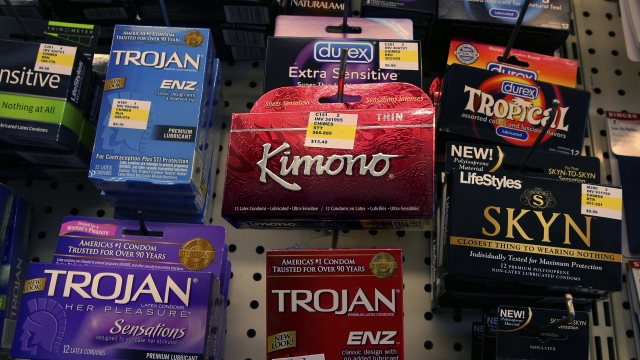 Sexually transmitted infections: Nobody wants them, but they're more common than you think, and transmissions are increasing.

The Centers for Disease Control and Prevention said syphilis cases rose 26% in 2021 — to their highest level in more than 30 years. HIV cases jumped 16%, while gonorrhea and chlamydia ticked up about 3% each.

Most STIs are preventable and curable. But if left untreated, the bacterial disease syphilis can lead to heart, brain or organ damage — even death. Pregnant people can also pass the infection on to their unborn children, leading to lasting damage.

These dangers are why infectious disease experts like Dr. Aniruddha Hazra, with the University of Chicago, want the public to take the risks seriously.

"You know, the most recent data, I mean, 1 in 5 people in eight states will have an STI on any given day. And really, you know, this increase is not new," said Hazra.

Dr. Hazra said the current spike is the culmination of a yearslong rise in infections only worsened by COVID.

Dr. Leandro Mena, the director of the CDC's Division of STD Prevention, has said COVID paused a lot of routine health care, including STI screenings. Plus, a lot of health workers turned away from STIs to focus on coronavirus-related care. That severely delayed diagnoses and treatment.

A study published last year found screenings for chlamydia and gonorrhea dropped dramatically for both men and women during the first few months of the pandemic. And screenings trailed 2019 numbers for the rest of the year.

While most activities stopped during the pandemic, doctors say sexual activity continued. In fact, some think there was a surge when the lockdowns let up.

There may also be a growing knowledge gap on how to prevent transmission.

"I find that a lot of the younger generation, when I ask them if they even know how to put a condom on, they don't," said Dr. Juliet Lemin, a physician.

STD, STI Cases Rise Each Year. Why Isn't The U.S. Making Any Progress?

The pandemic might have made rising STD/STI numbers even worse. Health officials have urged action, but prevention efforts have stalled for years.

Dr. Hazra says over the years, there's been a shift in how we view protected sex. Condoms were heavily promoted in the 1990s after the AIDS epidemic killed over 100,000 people in a decade.

But over time, major advancements in treating and suppressing HIV reduced some of the fear surrounding unprotected sex.

Now condom use is down among teens and younger adults. A CDC survey from 2019 showed that nearly 46% of sexually active high school students did not use a condom the last time they had sex. Pair that with the fact that out of all new STDs reported to the CDC each year, half were among young people aged 15 to 24. Then, there's worsening drug and alcohol use.

The government said in 2019, over 10 million people abused prescription drugs, with 1.6 million misusing pain relievers for the first time. And a national survey in 2021 found adult drinking rose 21% during the pandemic. These patterns, Dr. Hazra says, contribute to the spread of STIs.

"When we think about substance use, we often think about, you know, on sexual disinhibition," said Hazra. "Injection partners and and sharing of injection needle equipment, we know that injection drug partners and those networks often overlap with sexual networks as well."

"Public funding cuts will prevent the public health system, the safety net, of being able to track down people's partners so that your index patient doesn't get reinfected because their partner was also treated appropriately," said Powell.

And Naseema Shafi, the CEO of the Whitman-Walker Clinic, said this chronic underfunding creates unprecedented challenges amid the worsening monkeypox outbreak, which is spread manly between men who have sex with other men.

"Some were misdiagnosed with herpes or syphilis some were not even tested for [monkeypox] or MPV and some went to places that didn't have the proper infection controls in place to test for MPV," said Shafi.

"It isn't a question about money, you've been given astonishing amount of money. It's a question of leadership," said Burr.

As for solutions, federal health officials say we should prioritize tackling stigma and shame so people are more comfortable accepting sexual health care as a normal part of their regular health.

"I think for the longest time, we've really done this disease-focused, almost like a fear-based tactic in approaching sexual health, which is really outdated and in the end is not, again, sustainable in creating any type of behavior change," said Hazra.

Dr. Mena said federal officials are working on affordable take-home tests for some STI's. Dr. Harvey's group is working with health organizations to push for at least $500 million in federal funding for STD clinics. Some doctors hope states will take after California, which now requires health insurance to cover the entire cost of STI testing.

Stephanie Arnold Pang, is the senior director of policy and government regulations at National Coalition of STD Directors.

"Coverage of these services it normalizes them, it encourages individuals, it reduces their out of pocket costs," said Pang.

But the main hope from public health leaders is to empower the public to take charge of their sexual health, and keep the growing transmissions from spiraling out of control.