Why Are More People Coming Out On Social Media? 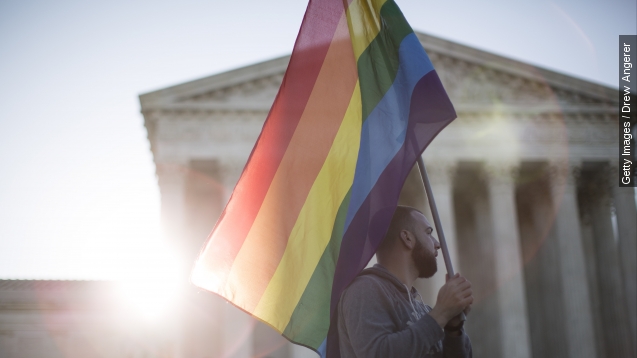 SMS
Why Are More People Coming Out On Social Media?
By Cody LaGrow
By Cody LaGrow
October 22, 2015
More people are coming out on Facebook than ever before, and the social networking giant says it's because of major strides in the LGBT movement.
SHOW TRANSCRIPT

The Internet facilitates all sorts of discussions. The good, the bad and apparently, the gay.

More people than ever before came out on Facebook last year, and the social networking giant released staggering numbers that show us just how many social media users are now more comfortable with being gay.

On Facebook alone, approximately 800,000 Americans came out last year. That's nearly twice as many as the year before.

Facebook counts "coming out" as someone who updated their profile to express attraction to the same gender or to specify a custom gender.

The trend is growing as we speak. More people are coming out each day at a rate nearly three times what it was a year ago.

The highest spike came in late June. Facebook credits the Supreme Court ruling that legalized same-sex marriage for the uptick. (Video via ABC)

In total, more than 6 million Americans have come out on Facebook, a figure the company says is an underestimate. Of those, 78 percent of them came out since 2012, demonstrating the strides in support for the LGBT community.

"Are you a woman?" Diane Sawyer asked.

"Yes. For all intents and purposes, I am a woman," Bruce Jenner said.

Facebook says other monumental moments from the past year led to more users coming out, including Diane Sawyer's interview with Bruce Jenner. Jenner came out as transgender and later emerged as Caitlyn, now one of the most prominent women in the trans community.

In total, Facebook saw a 25 percent increase in fans for the 300 most popular LGBT pages, including the Human Rights Campaign and GLAAD.

The battle for equality is far from over, but it seems it's more acceptable to embrace oneself on social media than ever before.