Why Are Cancer Rates Rising For Those Under 50? 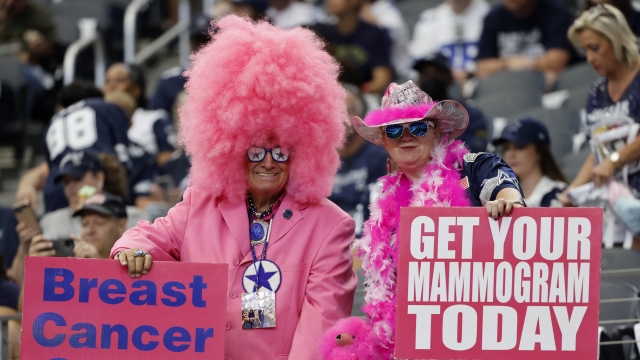 More people are getting diagnosed with cancer, especially those under 50 — but why?

"I was a federal agent at the time, moving up the ladder rapidly. I was a major in the U.S. Air Force," he said.

But that all came to a crashing halt at his annual check-up when his doctor gave him the shocking news — he had prostate cancer.

"I thought I was in perfect health. I had absolutely no symptoms," said Morris.

A recent study in the journal Nature found prostate cancer is among 14 different cancers rising among adults under 50 at an alarming rate. Breast, colorectal, endometrial and esophageal, head and neck, pancreatic, liver, stomach, thyroid and multiple myeloma cancers significantly increased between 2000 and 2012. Researchers say all of these cancers have specific risk factors in common like diet, lifestyle, weight, environmental exposures and our gut microbiome.

"We do medication, surgery, nutrition is kind of an afterthought but there's a great need for it because medication alone isn't going to solve our problems," said Mavasti.

The study's authors point out that more cancer diagnoses may be linked to earlier and more effective detection. But U.S. cancer screenings plunged during the pandemic. The government estimates 9.4 million screenings that normally would've happened in 2020 — never did.

Researchers collected samples of gas from 159 homes in California to see what types of gases were being emitted into homes when stoves were off.

"So instead of us diagnosing stage one and two, where surgical cure and other options of therapy are available, we've unfortunately seen an upswing in stage three and four cancers," said Lindner.

Researchers also noted a connection to the "birth cohort" effect. That means each generation has a higher risk of developing cancer because of the risk factors they were exposed to when they were younger. For example: people born in 1960 have a higher cancer risk than those born in 1950. While researchers didn't pin down specific factors driving the birth cohort effect, they do have some theories — starting with what we put in our bodies.

"Researchers have shown in the United States and around the world, the leading number one risk factor for premature disease, illness and preventable death is diet," said Mavasti.

Last year, NYU researchers found nearly 60% of the average American diet is made up of processed foods. Two large studies this year found men were 29% more likely to develop colorectal cancer if they ate ultra-processed foods, like frozen meals, cold cuts and sodas.

"These processed foods have been linked to the diseases of our time: diabetes, heart disease, obesity, cancer, even weakening of our immune system," said Mavasti.

The cancer study noted that since the 1950s the amount of processed foods Americans eat has drastically risen. Scientists believe those foods are affecting the microbes in our gut microbiome, which help with digestion and immunity. A study in the journal Frontiers showed our gut is vital in predicting how our bodies respond to cancer therapies, disease progression and ultimately whether we live or die.

"We can think of our gut as our first line of defense. Thats what's helping us build our immune system, assimilate vitamins and minerals in our body," said Opyt.

Why Is There Concern About Common Food Additives?

Some countries have banned certain food additives, but why and how can it affect your health?

The cancer study found alcohol contributed to rising rates as well, and pointed to growing alcohol use among teenagers since the 1990s, and excessive drinking among adults over the past few decades.

Professor Davd Jurnegon, who studies the influence of alcohol advertising and marketing, said many people don't realize the government lists alcohol as a carcinogen.

"Furthermore, if alcohol is — if your body processes alcohol, right, it turns into acetaldehyde, which is also a carcinogen," said Jurnegon.

Lack of sleep might also increase your cancer risk. The cancer study said children are sleeping far less today than they were two decades ago. Researchers also noted irregular sleep could lead to metabolic issues like obesity or type II diabetes, which are other risk factors.

"Because usually when people have poor sleep patterns or they're highly stressed they're making poor choices and it makes them difficult to stay on the plan long term," said McKernan.

If all of this seems overwhelming, health experts say there are a lot of things you can do to decrease your cancer risk. Depending on your age, yearly screenings may not be necessary, but are always a good idea if you're experiencing any abnormal symptoms. As for prevention: Dr. Shawn Dason with the OSU Comprehensive Cancer Center said your best defense may be a healthy lifestyle.

"If you really don't smoke, keep your weight kind of in moderation, keep your diet pretty balanced and see your health care provider regularly, get all of your preventative health care checks — I think that, as far as medical science and medical knowledge knows today, those are the best things that you can do to take care of your health," said Dason.

Most doctors don't recommend getting regularly screened for cancer until your fifties. But for Morris, catching cancer early saved his life.

Not only did Barney beat his cancer — he beat it twice.

And doctors stress: it's never too late to live your best, healthiest life.