Why Are Britain's Pubs Drying Up? 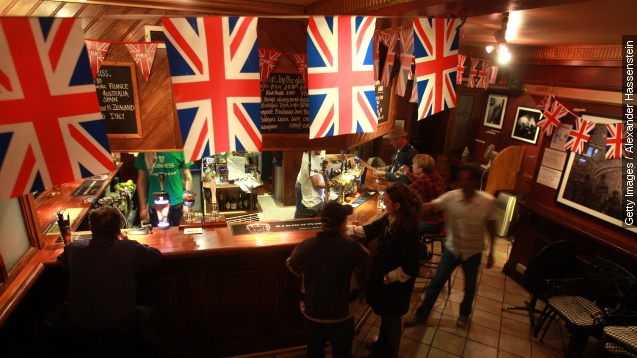 SMS
Why Are Britain's Pubs Drying Up?
By Katie Link
By Katie Link
August 20, 2015
Pubs across the U.K. are closing their doors, and the culprit seems to be a mix of competition, fewer people drinking and high rents.
SHOW TRANSCRIPT

For some pubs in the U.K., it's last call — for good. As many as 29 are closing each week, according to the British Beer and Pub Association. In the past three decades, more than 20,000 pubs in the U.K. have shut their doors.

So what's plaguing the industry? Well, a few things actually.

For starters, Brits are starting to get the memo: Drinking in excess is bad for your health. The British Beer and Pub Association (or BBPA) estimates consumption has fallen by as much as 18 percent in the past decade. (Video via vagabrothers)

There's also a lot of competition. But not in the way you might think.

The Elephant's Head pub never worried about The Oxford Arms pub across the street — until grocery stores starting stocking alcohol. Now there's competition among pubs to win your business away from the other guy and away from the grocery store.

To put it simply, it's cheaper to pick up a six-pack at the supermarket than pop in to the corner pub. According to one pub owner, 20 years ago, you could buy a pint of beer at a pub for the same price as a supermarket. Now that supermarket is selling beer for a third of the price, and pubs can't hang.

The reason? Sky-high rents imposed by independent companies that have bought more than half the country's pubs. In turn, the pubs have had to up the price of food and drink to pay the landlord.

Those same companies, known as pubcos, have long been accused of homogenizing Britain's pubs: offering the same food, the same bland atmosphere and the same beer. (Video via Punch Taverns, Focus Features / "The World's End")

But, some Britons are banding together to try to fight this trend.

"A very important piece of our culture, society and social history will die unless we do something about it," activist James Watson told NBC.

"Support groups" — if you will — have popped up in local communities and nationally. There are petitions to sign and registries to join.

At the end of the day, the "pub culture" supports nearly a million jobs in the U.K. We're guessing, for them, the glass is still half full.