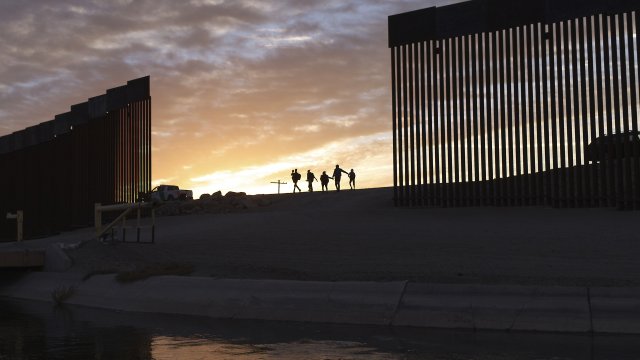 SMS
Why Are Border Encounters At An All-Time High?
By Newsy Staff
By Newsy Staff
July 26, 2022
CBP estimates show one in four people agents encountered in May were caught crossing the border more than once.

2022 has been a record year along the U.S.-Mexico border. U.S. Customs Border and Protection data shows monthly encounters have nearly doubled month to month from last year.

In 2021, there were a total of 1.7 million migrants. CBP has already seen more than 1.5 million encounters this fiscal year.

For over two years, border agents have sent millions of people back from the border under Title 42.

The health policy allows officials to turn away asylum seekers under the justification that there is “serious danger of the introduction of disease into the United States.”

Officials say this has led to repeat crossers.

CBP estimates show one in four people agents encountered in May were caught crossing the border more than once.

Title 42 is tied up in the courts as the Biden administration seeks to end the order.

A second Trump administration immigration policy may soon come to an end.

The Supreme Court in late June sided with the Biden White House in its effort to end the “Remain in Mexico” policy.

The rule required migrants from a third country to wait in Mexico while their asylum application moves through the courts.

Politicians, like Republican governor Greg Abbott of Texas, point the blame of the ongoing surge at the Biden administration.

Most migrants illegally crossing the border have landed in Texas. Agents say the influx has left them overburdened.

The Biden administration says it has maintained its message that the border is not open.

Vice president Kamala Harris, who is tapped to lead the white house’s response to border challenges, says more needs to be done to address the root causes as to why so many migrants are arriving at the border.

Pew Research Center findings show most migrants are coming from countries other than Mexico, predominantly from the northern triangle countries of El Salvador, Guatemala, and Honduras.

According to the Council on Foreign Relations, high rates of domestic violence, poverty and gang activity have contributed to more families fleeing north.

The passage is risky. More than 50 migrants died inside an overheated semi truck in San Antonio.

And the Missing Migrants Project recorded more than 1,200 migrants who went missing or died along the U.S.-Mexico border in 2021.

The White House says it is focusing efforts on its new anti-smuggling campaign.

The president says officials have made over 2,400 arrests in the three months since its creation.

In Washington, Democrats and Republicans agree action is needed. But there is no agreement on what needs to change.

Democrats are split on Title 42, with some wanting the policy to stay in place until there is a full plan to deal with increased activity at the border.  Republicans want the policy intact, and construction on president Trump’s border wall to resume to stem the flow of people heading north.

But as both sides look for answers, the surge in migration shows no signs of ending soon.