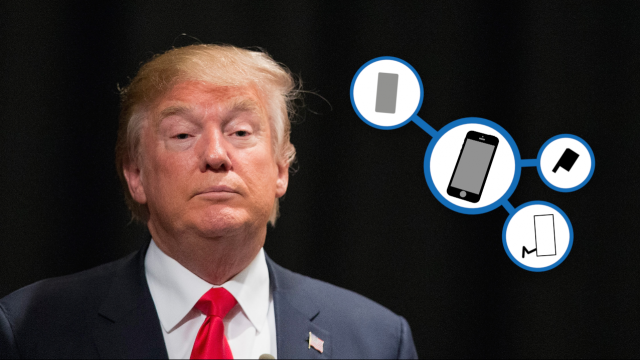 SMS
Why Apple Won't Follow Donald Trump's Advice About Supply Chains
By Evan Thomas
By Evan Thomas
January 19, 2016
Apple and its customers would lose big if the tech company moved all its manufacturing to the U.S., as Donald Trump recommended.
SHOW TRANSCRIPT

"We're going to get things coming. We're going to get Apple to start building their damn computers and things in this country, instead of in other countries," Trump said. (Video via C-SPAN, Donald J. Trump for President, Inc.)

But that's much easier said than done. With the exception of its Mac Pros, which it builds in Texas, Apple more or less committed to international manufacturing under former CEO Steve Jobs. (Video via Apple)

Of China's factories, one Apple official said: "The speed and flexibility is breathtaking. There's no American plant that can match that."

Other U.S. tech companies — including HP, Dell and Microsoft — do their manufacturing this way. Apple is just so good at it, it's now the most profitable company in the U.S. And it's not likely to give that up, no matter who asks nicely. (Video via Apple)

China has cheap labor costs — and a streak of unsafe labor conditions — but it's the local supply lines that really keep Apple's costs down. (Video via BBC)

For example: When the iPhone 5 was released, supply chain analysis group IHS estimated the total cost of materials and manufacturing came in at $207. The individual components came from established manufacturers across the region.

The U.S. doesn't have that kind of infrastructure. IHS reps told Marketplace that building an iPhone 5 stateside would put the bill of materials closer to $600.

"If the materials alone are costing $600, it stands to reason, that same iPhone could cost, perhaps, $2,000 at retail," IHS' Andrew Rassweiler said. (Video via Apple)

Flagship phones nearing the same price bracket as those shiny Mac Pros could be tough to swallow for Apple and customers — and maybe even Donald Trump. (Video via Apple)