Why 2014 NFL Draft Is Most Unpredictable In Recent History 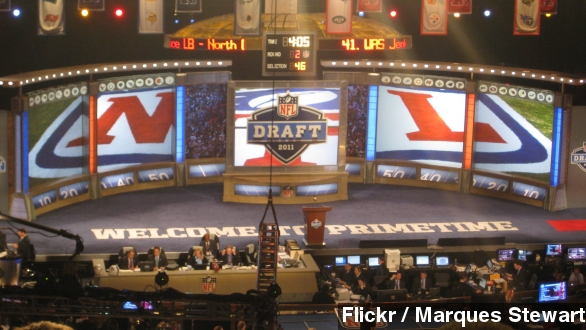 SMS
Why 2014 NFL Draft Is Most Unpredictable In Recent History

By Matt Moreno
May 7, 2014
Will the Houston Texans pick a QB or go DL? Will the Texans even be picking 1st overall? If anyone knows, they aren't talking.
SHOW TRANSCRIPT

With the first pick in the 2014 NFL draft ... well, we just don't know what's going to happen and that's pretty unusual.

For years, the first overall pick has been leaked — sometimes hours, sometimes days or even weeks — before the draft took place. (Via NBC, ESPN, SB Nation)

But, this year, the Texans — or whoever ends up with the first overall pick — could go in many different directions.

Recent history says the Texans will go with a quarterback: 12 out of the last 16 players drafted first have been quarterbacks, after all. (Via NFL)

But The Washington Post reports that might not be the case this time around. Defensive lineman Jadaveon Clowney could have his name called first.

That's if Houston even picks in the #1 spot. There's added uncertainty as to whether the Texans will trade the pick or keep it as is. (Via USA Today)

And here's another factor this year: the two main TV networks covering the draft, ESPN and the NFL Network, have told their reporters not to tip the upcoming picks on Twitter. (Via Bleacher Report)

Which, as CBS points out, means they won't be spoiling the suspense.

So, yes, there are guaranteed surprises in this year's draft right from the start.