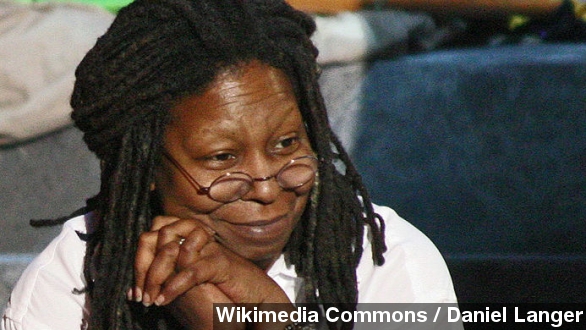 A writer for Bustle calls the piece, titled "My vape pen and I, a love story," "both hilarious and informative."

The column features lines like: "The vape pen has changed my life. No, I'm not exaggerating. In fact, her name is Sippy. ... And yes, I named her Sippy because I take tiny, little sips — sassy sips.​ ... And with each sip comes relief — from pressure, pain, stress, discomfort." (Via The Denver Post)

Goldberg's appreciation of pot has never been a secret — she's even admitted she was high during her 1990 Oscar speech after winning the best supporting actress award for "Ghost." (Via Bravo / "Watch What Happens Live")

GOLDBERG: "I learned a great lesson, though. Never smoke pot before there's possibility of having to talk to a hundred million people." ​(Via TMZ)

And then there was that one time on her talk show "The View" where she appeared ... out of it.

SHERRI SHEPHERD: "Are you feeling all right, Whoopi?"

According to a press release, an editor for The Cannabist got the idea for the column after appearing on "The View." He says he admired Goldberg's "curiosity and desire to discuss the issues surrounding America's ever-changing marijuana laws." (Via Digital First Media)

In the column, Goldberg says her marijuana use is medicinal due to her glaucoma. She adds, "It's important for people to know that there are alternatives out there to pain management, and this one is particularly magical." (Via The Cannabist)

Goldberg's column will appear every two months on The Cannabist's website.