Who Wins In Long-Awaited Amazon-Hachette Deal? 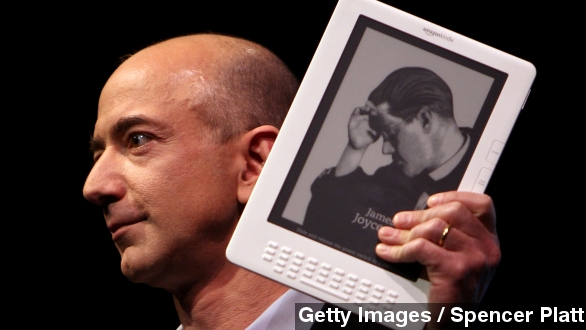 STUART VARNEY VIA FOX BUSINESS: "The two companies have been battling over the price of e-books, the terms of the deal not disclosed. Check the share price of Amazon. It's up $4 at $315."

The deal marks the end of a strange dispute between the companies that began when their contract expired last March.

One of the main sticking points during the dispute was over the price of e-books. Amazon wanted Hachette to drop its prices, allowing the retailer to retain more of the profits. (Video via Amazon)

In the deal announced Thursday, Hachette will be able to price its own e-books. It's a clear win for the company, although Amazon's Kindle division vice president said the deal "includes specific financial incentives for Hachette to deliver lower prices." Further details of the deal were not disclosed.

The dispute between the companies became public after Amazon began slowing delivery of Hachette books purchased through its site, as well as removing the ability to preorder some of the publisher's books.

Then, Amazon offered Hachette authors 100 percent of e-book profits to bypass its publisher all together.

DOUGLAS PRESTON VIA BLOOMBERG: "Well, it seems to be that it's an offer to divide publishers and their authors. It's not a serious offer."

For its part, Hachette began shipping its books to other retailers, and that may ultimately have been what led to the new deal.

JON STEINBERG VIA CNBC: "People can go other places. Hachette was going to Wal-Mart. Amazon had to come to a deal. Let them just fight."

This marks the second agreement Amazon has made with a so-called "Big Five" publisher in less than a month. The retailer signed a book pricing deal with Simon & Schuster in October. (Video via CNN)

News of that deal sparked speculation that the Hachette dispute would be resolved sooner than later.