Who Will Be The Democratic Nominee For Vice President? 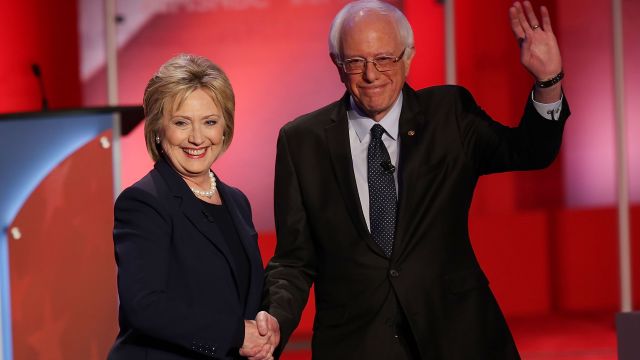 SMS
Who Will Be The Democratic Nominee For Vice President?
By Ben Lawson
By Ben Lawson
March 29, 2016
We still don't know who will be the Democrats' pick for president, but rumors are swirling about potential running mates.
SHOW TRANSCRIPT

We still don't know who will be on the Democratic ticket for president come November, but there is already speculation about who could wind up running as vice president.

For current front-runner Hillary Clinton, the most common theory is Julián Castro, the current Secretary of Housing and Urban Development.

"I believe she has a very strong vision for the future of the country. She understands the right investments we need to make in opportunity and how to make sure America prospers in this 21st century," Castro said.

Castro has already endorsed Clinton and even campaigned with her in the past.

But there's also talk about an all-female ticket, with speculation Clinton could tap California Attorney General Kamala Harris as her running mate.

Although Harris is already running for one of California's seats on the U.S. Senate, an analyst tells ABC, "She delivers a group of voters who I think Clinton is really going to have to work hard for to keep them from staying home."

For Bernie Sanders, there have been suggestions he could select U.S. Sen. Elizabeth Warren of Massachusetts to run alongside him.

And when pressed, he's refused to shut down the possiblity.

"Elizabeth Warren is a very good friend of mine. I have known her for a long time, before she was in the Senate. ... So, she uh, she and I will work together," Sanders said on "The Nightly Show."

But with primaries stretching until June, we still have months to go before we know who will earn the Democrats' nomination for president.

This video includes images from Getty Images and clips from Hillary for America, Bernie 2016, CBS / 'The Late Show' and KABC.