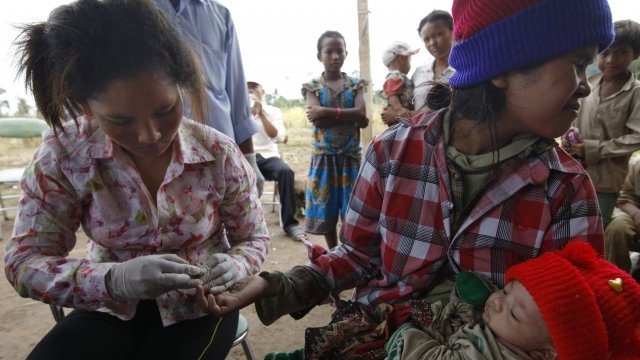 By Katherine Biek
November 19, 2018
Scientists are concerned that reductions in cases of the mosquito-borne disease are stalling after declining gradually from 2010 to 2015.
SHOW TRANSCRIPT

Health officials say the number of people being diagnosed with malaria worldwide is on the rise.

That's according to the World Health Organization's World Malaria Report 2018, which was released Monday. It says there were 219 million cases in 2017, compared with 217 million the previous year.

Scientists are concerned that reductions in cases of the mosquito-borne disease are stalling after declining gradually from 2010 to 2015.

There were 10 countries in Africa that saw a combined 3.5 million more people get infected with malaria in 2017 than in 2016. On the flip side, countries like India, Ethiopia, Pakistan and Rwanda all made great strides in combating malaria in 2017.

Doctors say the countries that were successful at decreasing malaria rates were ones whose governments took an active approach, making sure vulnerable populations had access to treatment and to prevention resources like mosquito netting.

Meanwhile, the World Health Organization reported that only half of people in Africa who are at risk of contracting malaria were sleeping under an insecticide-treated mosquito tent in 2017.

The WHO had been hoping to reduce malaria cases and death rates by at least 40 percent between 2015 and 2020. Its director-general says the 2017 data "reconfirms" it's off track for meeting those goals.