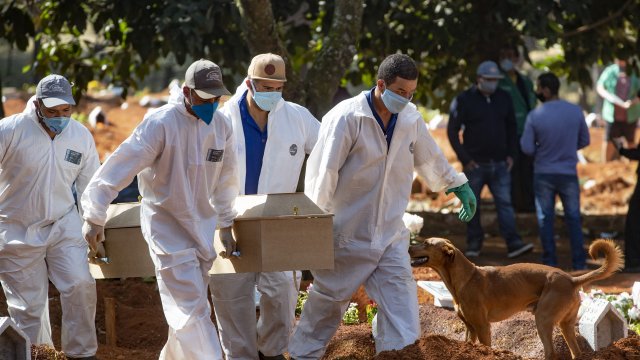 SMS
WHO Records Largest 24-Hour Increase In Coronavirus Cases So Far
By Ahmed Jawadi
By Ahmed Jawadi
May 21, 2020
The WHO's director-general said Wednesday​ more than 100,000 new coronavirus cases had been reported to the agency in the past 24 hours.
SHOW TRANSCRIPT

The World Health Organization said Wednesday it had received the most reports of new coronavirus cases in a single day since it began tracking the outbreak.

"In the last 24 hours, there have been 106,000 cases reported to WHO — the most in a single day since the outbreak began," WHO Director-General Tedros Adhanom Ghebreyesus said. "Almost two-thirds of these cases were reported in just four countries."

The director-general did not say which countries those were, but the WHO's technical lead for COVID-19 confirmed to CNN he was referring to the U.S., Russia, Brazil and India.

The WHO's emergencies chief, Dr. Mike Ryan, said most of the U.S.' funding goes directly through the program he heads to help support "humanitarian health operations ... [in] some of the most difficult places in the world."

Earlier this week, President Donald Trump threatened to pull the U.S. from the WHO and end funding to the organization.

"We'll obviously have to work with other partners to ensure those funds can still flow," Ryan said. "So this is going to be a major implication for delivering essential health services to some of the most vulnerable people in the world. And we trust that other donors will, if necessary, step in to fill that gap."