WHO Recommends Using Ebola Survivors' Blood To Treat Others 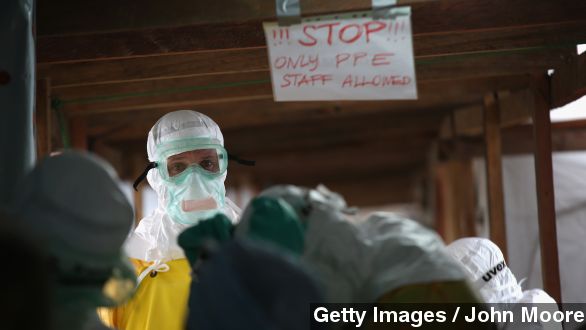 SMS
WHO Recommends Using Ebola Survivors' Blood To Treat Others

By Evan Thomas
September 6, 2014
The World Health Organization has approved blood transfusions from Ebola survivors as treatment for the disease.
SHOW TRANSCRIPT

The World Health Organization announced Friday it has approved the use of blood transfusions to combat Ebola.

Blood from survivors contains antibodies that could help current patients fight the disease. The decision comes after a two-day meeting of WHO officials in Geneva, where they discussed the use of experimental treatments. (Video via Euronews)

Voice of America quotes the WHO’s assistant director-general, who says the organization is moving faster than usual— having developed its latest treatment protocols in just days.

“With any other clinical trial that I know of, you would talk about weeks and months.  …the timelines change of all the processes that we know for this particular Ebola outbreak.”

The WHO blames Ebola for nearly 4,000 infections in West Africa since the outbreak began in March. So far the disease is known to have killed over 1,200 people.

And while transfusions could help combat the disease, they’re no guarantee.

ABC reports Kent Brantly, an aid worker who contracted and later recovered from the virus, received a blood transfusion from a child donor who had also survived.

But he also received the experimental Ebola drug ZMapp. At this point, doctors simply aren’t sure which treatment was most effective.

And as of Friday, the WHO says it still hasn’t officially tested ZMapp or other drugs for viability. A Forbes columnist says “the consensus was that it was too early to deploy these even for human safety studies.”

Affected regions, meanwhile, are taking drastic steps to cut down on the spread of Ebola. Al Jazeera reports Sierra Leone is preparing to institute a three-day countrywide curfew later this month.

Citizens will be “confined to their homes” starting September 18 to prevent disease transmission and to give aid workers time to spot and address new cases.

The WHO says more rigorous trials of experimental drugs will begin as soon as pharmaceutical companies can turn out enough supply.