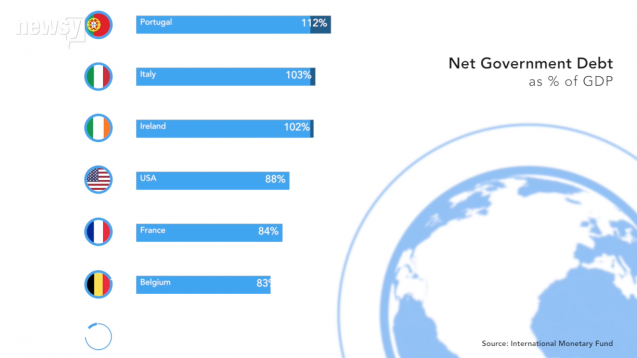 SMS
Who Owns America's Debt?
By Kate Grumke
By Kate Grumke
November 2, 2015
U.S. debt comes up a lot on the campaign trail and in Congress. Here's a breakdown of who owns the country's treasury securities.
SHOW TRANSCRIPT

The U.S. has about $18 trillion in debt. You've probably heard that before.

The U.S. issues treasury securities to finance its own debt.

The majority of U.S. debt is owned by the U.S. itself, and the biggest owner is the Social Security trust fund.

Of the rest of the debt, another large chunk is owned by domestic holders, including state and local governments, mutual funds, savings bonds and pensions.

But this remaining chunk of U.S. debt is the one that draws a lot of attention. It's the treasury securities owned by foreign and international groups. Let's break that debt down.

The largest foreign holder of U.S. securities is China, with $1.27 trillion. Japan is a close second at $1.2 trillion. The next highest are Caribbean banking centers, oil exporters, Brazil and the U.K.

So that $18 trillion may sound like a huge amount of debt.

And it's grown a lot in the past decade.

But as a percentage of GDP, it's similar to that of other advanced economies like France or Belgium.

This video includes CGI Snake by Chris Zabriske / CC BY 4.0.