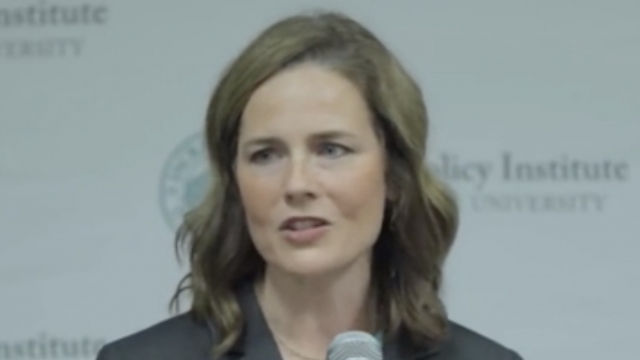 SMS
Who is Judge Amy Coney Barrett?
By Amber Strong
By Amber Strong
September 23, 2020
Considered a front-runner, Barrett, a former clerk for the late Justice Antonin Scalia is a favorite among many conservatives.
SHOW TRANSCRIPT

When it comes to President Trump’s picks for a Supreme Court nominee.

“They’re all outstanding but I have one or two in mind,” Trump told reporters.

Amy Coney Barrett is said to be atop the list. If the name sounds familiar, it’s because the former Notre Dame law professor has been here before.

Barrett was a top contender to replace Justice Anthony Kennedy in 2018. That spot went to Brett Kavannaugh. However, before her consideration for the high court, the Louisiana native and former clerk of the late Antonin Scalia was nominated to the Court of Appeals.

“When you read your speeches, the conclusion one draws is that the dogma lives loudly within you,” said California Senator Dianne Feinstein during a confirmation hearing.

She was confirmed, but her critics in the Senate feared Barrett would not uphold the precedent of laws like Roe v. Wade due past statements on her Catholic faith and a 1998 article she co-wrote saying Catholic judges are morally precluded from enforcing the death penalty.

“I’m being considered for a position on the Court of Appeals, there’d be no opportunity to be a no vote on Roe. But as I said to the committee, I would faithfully apply all Supreme Court precedent,” replied Barrett.

She went on to say her faith quote “would not bear on the discharge of my duties as a judge."

Since her appointment to the Chicago-based 7th Circuit Court of Appeals, Barrett joined the dissent in a case involving an Indiana law signed by Mike Pence when he was governor.

That law banned abortions motivated by disabilities like Down syndrome. It was deemed unconstitutional.

However, the dissenting judge joined by Barrett wrote, “Using abortion to promote eugenic goals is morally and prudentially debatable.”

That “dogma” statement from Feinstein was used as a galvanizing moment for conservatives and viewed as a religious litmus test, some of those same groups are throwing their support behind Barrett’s nomination today.