Who Is Hayat Boumeddiene, France's Most Wanted Woman? 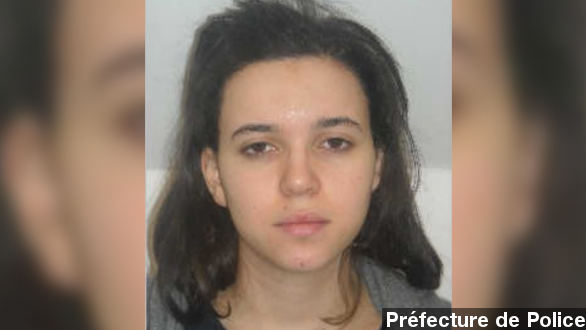 SMS
Who Is Hayat Boumeddiene, France's Most Wanted Woman?

By Jake Godin
January 10, 2015
French police say Hayat Boumeddiene was the accomplice of Amedy Coulibaly. The pair is accused of killing a policewoman in southern Paris Thursday.
SHOW TRANSCRIPT

Her name is Hayat Boumeddiene. Although no one knew who she was before Friday, she’s now at the top of France's most wanted list.

We first saw 26-year-old Boumeddiene Friday morning, when French police released a wanted poster with her face on it.

Police say she and her partner, Amedy Coulibaly, are involved in the Thursday killing of a policewoman in Montrouge in southern Paris.

Coulibaly was ultimately killed during a police assault late Friday afternoon. He had taken multiple hostages in a kosher supermarket in Porte-de-Vincennes.

Some speculate she was with Coulibaly during the kosher supermarket hostage situation, but now it looks like that might not have been the case.

The Wall Street Journal has sources claiming Boumeddiene actually left France Jan. 2, before the attacks, and went to Turkey. From, there a Turkish official said she most likely crossed into Syria.

According to Sky News, in 2009 she met and later unofficially married Coulibaly during a religious ceremony. It’s thought that that was when she started to become radicalized. (Video via BFMTV)

A french newspaper reports that Boumeddiene was interrogated by French police in 2010 over her relationship with Coulibaly. The paper notes during the interrogation she refused to condemn Al-Qaeda and blamed America for killing civilians.

Boumeddiene is also linked to the Kouachi brothers, who were killed by police around the same time as Coulibaly during a separate hostage situation.

The two brothers are believed to be the gunmen in the terrorist attack on the French satirical weekly Charlie Hebdo that left 12 people dead. The brothers, Boumeddiene and Coulibaly are all believed to have been a part of the same terrorist cell.

The Paris prosecutor said Friday that there was evidence Boumeddiene had exchanged around 500 phone calls with the wife of one of the Kouachi brothers just in 2014.

Currently there is a massive manhunt underway for Boumeddiene. Anyone who sees her is being urged to contact the French police.