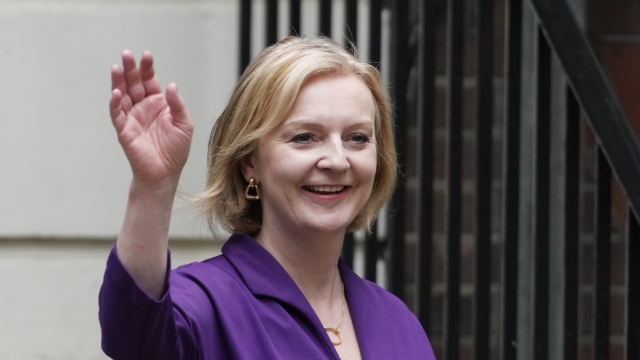 SMS
Who Is Britain's New Prime Minister Liz Truss?
By Luke Hanrahan
By Luke Hanrahan
September 5, 2022
She's seen by many of the Conservative Party members who elected her as Boris Johnson 2.0, but experts expect her to be more of an ideologue.

But who is Liz Truss?

She's the foreign secretary under Boris Johnson. And she's seen, by many of the Conservative Party members who elected her, as Boris Johnson 2.0.

But experts expect her to be more of an ideologue in the mode of former Prime Minister Margaret Thatcher.

"I think we're going to have a very radical, right-wing, free market prime minister, and one that actually is more of an ideologist than a pragmatist," University of Nottingham Political History Professor Steven Fielding said. "Boris Johnson — just to contrast her with him — Boris Johnson was someone who...he was kind of all over the place. He didn't really believe in anything except Boris Johnson."

On the home front, many are frustrated that for the third time in recent years, the prime minister has been chosen by Conservative members and not a general election. That's because conservative members of Parliament keep sacking their leaders.

"I would prefer for there to be a general election to be honest, it should be someone leading the country who is chosen by the country," London resident Jess Cox said.

"It just seems bizarre, the whole system and how long it's taken to get something done," London resident Patrick Coyne said. "The whole rigmarole of who it goes to, it just wants a bomb putting under it and getting into the real world. I mean, all this palaver today? How long does it take to put someone in Number Ten and how much it cost?"

The pressure will be on new Prime Minister Liz Truss immediately, inheriting an economy in greater trouble and a cost of living crisis greater than at any time since 2008. As well as industrial unrest, inflation is soaring and the pound expected to slump to parity with the dollar for the first time since 1992.

Liz Truss will be hoping to be inside 10 Downing Street until the next scheduled general election in two years time, and beyond. But to get there she'll have to ride out a rocky road ahead.

Liz Truss, who is well known on the world stage, is expected to pick up the baton from Boris Johnson on the war in Ukraine and potentially, take a firmer line when it comes to relations with China.

"Liz Truss is a more hawkish person than Boris Johnson, the former prime minister," Royal United Services Institute Director of International Security Studies Neil Melvin said. "She has, for example, committed to increasing the threat perception of China. So China will be recognized under her premiership, she's indicated, as a threat to the U.K."

What type of Prime Minister Liz Truss will be remains to be seen.

Many in the U.K. will be paying close attention in these first few days and weeks.