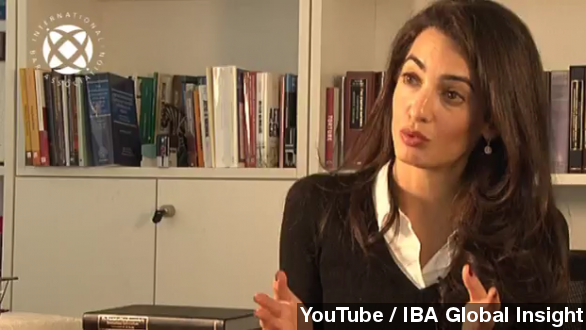 By Briana Koeneman
April 29, 2014
We know Amal Alamuddin must be pretty special to lock down George Clooney. Here's what you need to know about the woman who stole Clooney's heart.
SHOW TRANSCRIPT

She's managed to get perpetual bachelor George Clooney to put a ring on her finger, after all. (Via E!)

But Alamuddin is a lot more than the latest beautiful woman to take her place on Clooney's arm: here's what you need to know. (Via YouTube / IBA Global Insight)

"In a free society, you don't want the government to exercise an influence over judges."

The 36-year-old is an extremely successful international lawyer who's represented some pretty big names — including WikiLeaks founder Julian Assange. (Via Euronews )

​The New York Post reports Alamuddin was born in Lebanon and studied law at Oxford University and New York University School of Law.

And according to Forbes, after completing her education, she practiced law at Sullivan & Cromwell LLP's New York office for several years.

From there, Alamuddin moved on London, where she now specializes in international law, human rights, extradition and criminal law for the firm Doughty Street Chambers.

During her career, Alamuddin has advised United Nations former secretary-general Kofi Annan and Ukraine's ex-prime minister Yulia Tymoshenko, as The Independent points out.

And she has represented Assange in his fight against extradition from Sweden since 2011. (Via ABC)

On top of all of that, Alamuddin is also a published scholarly writer.

She co-edited the book "The Special Tribunal for Lebanon" and co-authored an article in the Journal of International Criminal Justice. (Via Oxford University Press, Oxford Journal)

With all of these accomplishments under her belt, one of her colleagues had nothing but praise for the successful lawyer during an interview with the London Evening Standard. "She is a fabulously bright woman, she’s independent and has a Rolls-Royce mind."

And while her fiance has a long list of impressive former flames, Alamuddin's isn't too shabby either. (Via CBS / "Late Show")

According to several reports, she has been linked to Eric Schmidt, the director of Google, in the past. (Via Bloomberg)

Though Clooney has long preferred the actress/model types, like his most recent ex Stacy Kiebler, many say the actor really needed a woman of substance — like Alamuddin — to get him to finally commit. (Via People)

And they have a lot in common too — As CNN notes, both Clooney and Alamuddin share a passion for human rights.

So if anyone could steal the elusive George Clooney's heart, it would definitely be someone who's both brilliant and beautiful. Life's just not fair.