A Fraction Of Global Refugees Resettle In The U.S. Who Are They? 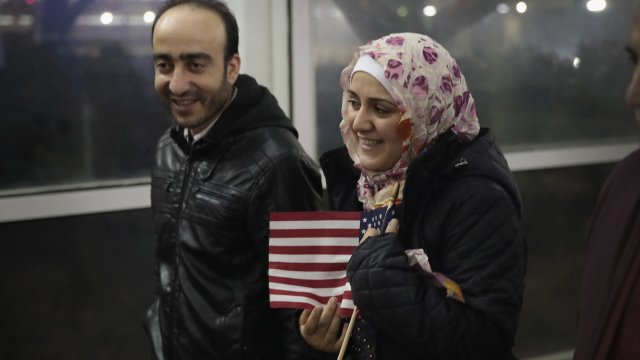 Around 1.5% of global refugees in need of resettlement become U.S. refugees. What sets them apart, and how does the U.S. select them?

"Some Buddhist people come back from our behind, and then they killed my mom. I ran away because if I stayed too, they would have killed me, too."

"Most of the young men are taken, and we don't know whether they will come back on. I was threatened to be killed."

"Because I'm a male nurse, some armed rebels asked me to work for them. I was forced to leave immediately because I refused. They wanted to kill me."

Hasan Korimullah, Imran Mohammad and François Matenga have all been forced to flee their home countries because of war and persecution. But unlike the vast majority of worldwide refugees, they eventually got to resettle in the U.S.

So, what's different about Korimullah, Mohammad and Matenga? Who gets to be a U.S. refugee and who doesn't? It's a pretty straightforward question, yet the answer depends on a lot of factors.

Let's start at the top with the president. He sets the agenda by announcing every year a cap on refugee admissions. His cap for 2019 is the lowest ever.

That being said, the 26,000 refugees resettled so far this fiscal year indicate that the pace of admission is slowly picking up.

Still, when compared to 2017, the decline remains pretty steep. That's especially true for these mostly-Muslim countries the administration deems "high-risk."

Even if the numbers are historically low, a couple thousand refugees still make it to the U.S. every month. They mostly come from the Democratic Republic of Congo, Burma and Ukraine. Eighty percent are Christians and 16% are Muslims. Now, how did they get selected?

"The process is reserved only for a very, very small fraction of the refugees in the world who have demonstrated that they have very specific and acute vulnerabilities."

For most U.S. refugees, the selection starts with the United Nations High Commissioner for Refugees, also known as the UNHCR. With interviews and background checks, the organization identifies, out of the 25 million refugees worldwide, those most in need of resettlement to a third country, like the U.S.

"These could be survivors of torture, these could be elder or young people with very acute and specialized medical needs, could be women and girls at risk, teens and adolescents at risk."

UNHCR refers these cases to the U.S., which then conducts its own vetting process. That's how Korimullah and Matenga ended up in the U.S. American officials decided that they didn't pose a national security threat and that the country they had initially fled to couldn't offer them enough protections. For Korimullah, that country was Malaysia.

"We start the boat, but we don't know where we're going, no food, no water in the boat. After 15 day we hit Malaysia. But in the boat, I'm the youngest. And then some people can go with their parents and brother or friend, but I don't — I don't have anybody in Malaysia."

For Matenga, the country was Burundi, where doctors diagnosed his daughter with a rare disorder that required urgent leg surgery abroad.

"The doctors decided that my child could not be cured here in Africa."

Like Korimullah, he fled Burma because of violence against Rohingya Muslims. But after years in camps and detention centers in nearby countries, he made it to Australia, where he hoped to receive asylum. However, by the time he arrived, Australia had stopped resettling migrants who came by boat, detaining them instead on two offshore islands.

"In my compound, there were nearly 500 people from around the world, there are 19 different nationalities. We had been together for nearly five years when I was there. So we became like a family."

Mohammad was released and resettled to the U.S. in 2018 because of a deal between Australia and the Obama administration. President Trump honored it, even though he called it "stupid."

"We had heard terrible stories about conditions there, and we wanted to take more refugees. So this was not a difficult question to handle inside the Obama administration. We did negotiate with the Australians, though, asking them to undertake a few things. Some of that is classified. But some of it was very, you know, modest proposals that Australia just do more to help refugees globally."

As a result of the deal, more than 500 refugees — many of them Rohingya — have recently been transferred and resettled to the U.S.

"I am very glad that we are taking Rohingyas, because they are Muslim, and I was afraid there'd be a blanket ban against Muslims coming. And I think the difference is that unlike the Somalis and the Syrians and Yemenis, there are no strong jihadist movements inside Burma, so I think the concern that Rohingyas could be members of a radical group is less."

The deal illustrates how — besides UNHCR referrals — the White House can also identify certain at-risk populations that it's keen on resettling. But the Trump administration has made it clear from the beginning that it opposes any form of expanded resettlement. Instead, the White House wants primarily to support refugees "close to their homes to help meet their needs until they can safely and voluntarily return home."