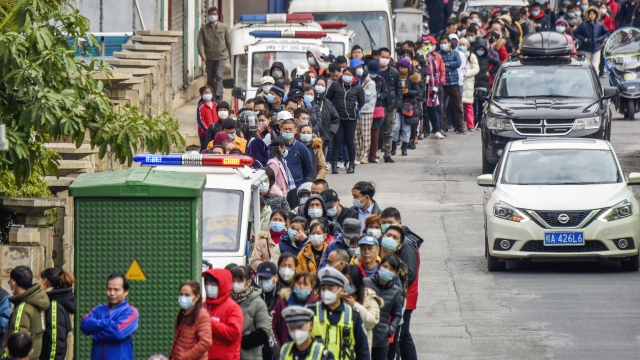 The World Health Organization declared a public health emergency of international concern on Thursday over the coronavirus outbreak that has spread from China to more than a dozen countries.

The director-general of the WHO praised China's containment efforts and said without its help, "we would have seen many more cases outside China by now — and probably deaths."

"So far, we have not seen any deaths outside China, for which we must all be grateful," Tedros Adhanom Ghebreyesus, the director-general of the WHO, said. "Although these numbers are still relatively small compared to the number of cases in China, we must all act together now to limit further spread."

The WHO said it's worried about the virus reaching countries that aren't ready to fight it.

"We don't know what sort of damage this coronavirus could do if it were to spread in a country with a weaker health system," Ghebreyesus said.

The outbreak of the respiratory virus started in Wuhan, China, and has killed at least 170 people in the country. Wuhan is now under a travel lockdown. Even though multiple countries have been affected, most reported cases — roughly 99% — are in China.

On Thursday, the CDC said the first human-to-human spread of the coronavirus had occurred in the U.S., bringing the total number of U.S. patients up to six. The director of the CDC said a woman who had traveled to China spread the virus to her husband. All of the other U.S. patients had traveled to China. The CDC is investigating 92 other possible cases.

President Donald Trump has created a task force to help monitor the coronavirus. The White House said the task force has been meeting daily since Monday and will ensure people have "the most accurate and up-to-date health and travel information."

Nearly 200 Americans were flown out of China and some volunteered to stay at a military base in Southern California for monitoring. None of them had shown signs of sickness when they left China.