Who Can Hold Donald Trump Accountable On Conflicts Of Interest? 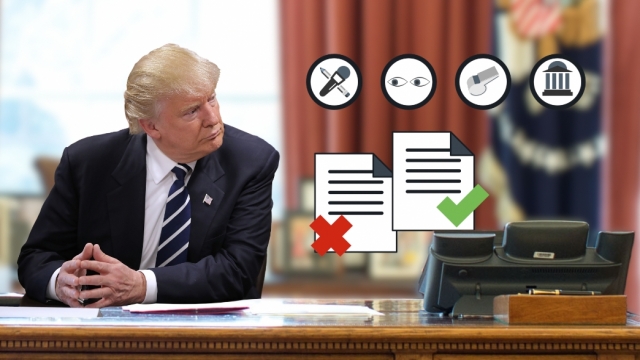 SMS
Who Can Hold Donald Trump Accountable On Conflicts Of Interest?
By Kate Grumke
By Kate Grumke
December 14, 2016
President-elect Donald Trump's businesses have opened the door to potential corruption allegations in an unprecedented way.
SHOW TRANSCRIPT

You find a huge blind spot in the U.S. government when you try to answer this question: Who holds President Donald Trump accountable for conflicts of interest? The truth is, there's no good answer. Newsy spoke with political science experts and legal watchdog groups to find out who has the power to challenge Trump on his potential business conflicts of interest.

For an example, let's look at Trump's hotel in Washington, D.C. The lease is with a government agency Trump will control when he becomes president, and that lease says elected officials can't benefit from the contract.

Typically, that federal agency, the General Services Administration, would determine if there's a breach in the contract and would end the lease. But the GSA will technically be under Trump's control. And if the issue went to court, Trump's company would be pitted against the GSA, likely represented by the Justice Department, which Trump also oversees.

So, if Trump or his family benefit financially from government policy he shapes, what can be done? And who's supposed to do it?

First, wrongdoing would have to be exposed. That's really up to journalists, watchdog groups, whistleblowers and some government agencies. But those groups can only point out problems and make recommendations about what to do; they don't have the power to fix the issue.

"The president of the United States is allowed to have whatever conflicts of interest he wants," Trump told The New York Times.

Trump is technically right. U.S. code exempts the president and vice president from conflict of interest laws. Of course, Congress could change that.

In fact, Congress and the courts are the only two bodies that really have the teeth to hold the president accountable.

Congress can do that through official investigations; it has near unlimited authority to investigate. If it found wrongdoing, the next step would be impeachment, with a simple majority in the House and a two-thirds majority in the Senate. Presidents can be impeached for treason, bribery, abuse of power, perjury and other high crimes.

But one expert we spoke with said impeachment is an extreme step. Trump's party has a hold on both chambers, making an impeachment attempt less likely, especially at the outset of his presidency.

There is also an off-chance that Trump's business conflicts could end up in the courts. That would either be because a state attorney general or U.S. district attorney has jurisdiction over a case involving Trump's businesses in an area or because someone has standing through personal injury. Presidents can be sued for civil cases, as we learned with Bill Clinton and Paula Jones.

Finally, Trump could always hold himself accountable. He could listen to criticisms about the conflicts of interest in his business dealings and address the problems himself. Plenty of independent watchdogs have already laid out exactly how he should do that.

So, how did we end up with this gap in our system when it comes to this kind of check on corruption in the executive branch? It's because the U.S. has a system built on precedents. And Trump's far-reaching business, even in the hands of his family, creates an unprecedented situation.