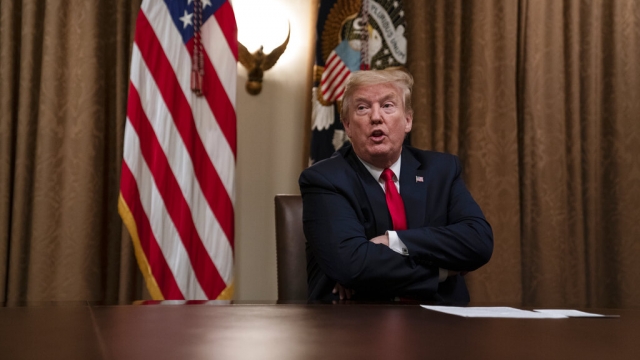 SMS
WHO Forms Global Coalition To Create Vaccine After U.S. Cuts Funding
By Kellan Howell
By Kellan Howell
April 27, 2020
The WHO is working with global leaders and philanthropists to develop vaccines for COVID-19. Experts say President Trump could be slowing them down.
SHOW TRANSCRIPT

The World Health Organization says it's working with global leaders and the Bill and Melinda Gates Foundation to develop vaccines, tests and treatments for the coronavirus.

"This is a landmark collaboration to accelerate the development, production and equitable distribution of vaccines, diagnostics and therapeutics for COVID-19," WHO Director General Dr. Tedros Adhanom Ghebreyesus said Saturday.

But experts say President Trump's efforts to isolate the U.S. from the WHO could slow down those efforts.

"It delays things, it confuses things, it creates unnecessary division and tension in the scientific enterprise. Americans pay a price for that," said J. Stephen Morrison, senior vice president and director of the Global Health Policy Center at the Center for Strategic and International Studies.

"Today I'm instructing my administration to halt funding of the World Health Organization while a review is conducted," President Trump told reporters on April 14.

A senior administration official told Newsy: "America’s world-leading scientists are working hard on a COVID-19 vaccine. We welcome serious efforts to assist in that endeavor and look forward to learning more about the World Health Organization’s proposal."

It's not just the funding: According to The Washington Post, the Trump administration has directed the State Department to remove any mention of the WHO from virus fact sheets, and an internal memo from Secretary of State Mike Pompeo instructed workers to "cut out the middle man" when it comes to public health initiatives.

A State Department spokesperson told Newsy: "Our action in no way diminishes U.S. leadership on global health matters, including the current COVID crisis. We have ample ability to provide aid ourselves or through other partners to fight the pandemic, and we will continue to do so."

Meanwhile, the House Foreign Affairs Committee has launched an investigation into the Trump administration's decision to halt funding to the WHO. In a letter to Pompeo, Committee Chairman Elliot Engel called the move a political distraction from the White House's own response to the pandemic.

"Republican senators in particular over the last three years of the Trump administration have been very important at critical moments when foreign assistance has come under attack from the White House," he said.

For now though, the WHO will continue to work with American businessman Bill Gates, who describes his foundation's role in helping fund vaccine efforts in a blog post:

"Every additional month that it takes to get the vaccine is a month when the economy cannot return to normal. However, it isn't clear how countries will come together to coordinate the funding. Some could go directly to the private sector but demand that their citizens get priority. There is a lot of discussion among governments, the World Health Organization, the private sector, and our foundation about how to organize these efforts."

He says the goal is to pick one or two vaccines and vaccinate the entire world. That would take about 7 billion doses for a single-dose vaccine.