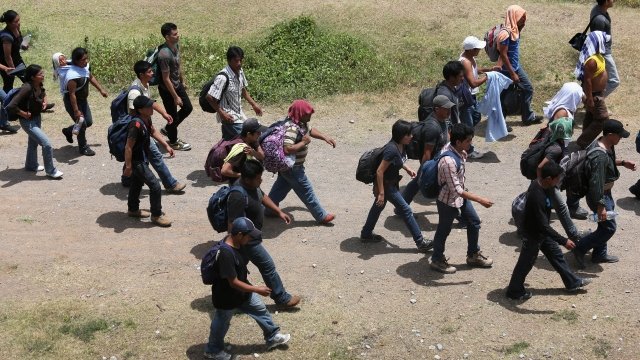 SMS
Who Would Trump's Wall Allegedly Prevent From Crossing The Border?
By Ben Schamisso
By Ben Schamisso
February 1, 2018
While the number of thwarted crossings hit a 17-year low after President Donald Trump's inauguration, it has now increased for eight straight months.
SHOW TRANSCRIPT

When it comes to immigration reform, the two things you probably hear the most are "Dreamers" and "border wall." But what about the undocumented migrants who Trump's wall would allegedly prevent from crossing the border? Why do they come in the first place, and what happens to them when they're caught?

"They are riding trains, they are sleeping in the desert, they are going days without drinking water," explained Uzoamaka Emeka Nzelibe, a clinical professor of immigration law at Northwestern University. "For a lot of the women that I represent, they are risking being sexually assaulted."

The vast majority of those migrants come from Guatemala, Honduras, El Salvador and Mexico — countries with extremely high homicide rates.

While border apprehensions hit a 17-year low right after President Donald Trump's inauguration, that number has now increased for eight straight months, up to more than 40,000 in December. And out of those 40,000 apprehended migrants, more than 5,000 were unaccompanied minors.

"I wanted to see my mom because I hadn't seen her in a long time. And I also wanted to escape from Honduras basically because of the gangbangers, all the terrible things they would do to me if I had stayed there," said Thiago. He made the journey as an unaccompanied 14-year-old in five days from Honduras to the U.S. border in 2014. He asked Newsy to hide his identity for safety concerns and because he doesn't want to compromise his ongoing immigration case.

"When I would go to school, like, they would say that they were gonna kill me if I didn't join the gang. They killed like one of my family members. I just had to do it. I didn't have another option. I just didn't want to stay because I knew something was going to happen to me in Honduras."

The young migrant was able to join his family in Chicago, where he's been living for the past four years. With help from pro bono attorneys, he recently got a green card and will soon graduate from high school.

Emeka Nzelibe added: "Something that might be quite common is a mom experienced domestic violence fled, left child either with grandparents or some caretaker, and then that situation deteriorated in some way, and then the child seeks out mom to come to the U.S."

Many advocates of immigration restrictions argue these migrants also make the journey to the U.S. because they've heard of generous immigration visa programs, such as DACA.

"So we're going to be taking Americans out of jobs and giving those jobs to DACA recipients effectively," said Kansas Secretary of State Kris Kobach on Fox News. "And it's going to cause a surge in illegal immigration [...] which will come in, there's no question. If we grant an amnesty, they will come in." 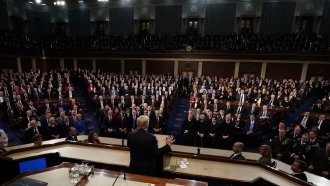 The flip side of this argument is when the Trump administration advertises tough immigration policies, it deters immigrants from making the journey. But as the recent surge in border apprehensions has shown, deterrence has its limits.

"Maybe what will happen is that the number will go down a little bit, but then people may get more desperate," said Emeka Nzelibe. "They may hire coyotes, they may pay more money, they may do other things because what's causing them to come to the U.S. is real; it's not artificial."

What happens to migrants after they're apprehended depends on these three factors: how close to the border they are caught, if they are unaccompanied minors and if they are Mexicans.

First, migrants near U.S. borders have less due process rights than immigrants in the interior. As a result, most migrants caught within 100 miles of a border get placed in expedited removal proceedings and never get to see an immigration judge. That's unless the migrants can prove to an asylum officer they have a "credible fear" of persecution or torture if returned to their home country.

Emeka Nzelibe explained: "You have less rights at the border, and that, in some extent, might include even citizens. When you're traveling for example, people can search your luggage, which they may not be able to do if you're in the interior. We should have more control when we're deciding who we should come in to our country, and if somebody doesn't present the right types of papers, we should be able tell them to go home versus someone who's been here for a while and has more ties."

Second, unaccompanied minors receive greater protections because they are considered the most vulnerable of migrants.

Their custody must be transferred to the Office of Refugee Resettlement within 72 hours of their apprehension. And while their immigration cases proceed, the ORR detains them in shelters while trying to find family members or other sponsors to release them to.

But unaccompanied Mexican kids are treated differently. And that's because the U.S. has a repatriation agreement with Mexico. They are immediately sent back unless border officers believe they can't make independent decisions, are victims of trafficking or would be persecuted if returned home.

But because they are minors, the screening is less adversarial than the "credible fear" interview for adults.

"It's important to understand the process so that you can participate in the debate first of all, right? So, I think when you know more about what happens to these kids and why they are coming, you're not reacting from your gut when you hear the issues — you're well-informed," Emeka Nzelibe said.