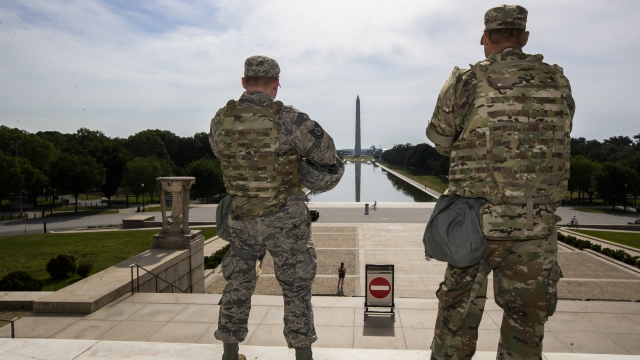 A White supremacist was among the National Guard members deployed to Washington, D.C., to quell protests for George Floyd.

Shandon Simpson, 24, joined the Ohio National Guard in May 2018. On Facebook, he describes himself as a “campguard at Auschwitz.” On YouTube, he subscribes to groups like “Adolf Stalin.” And on the messaging app Telegram, he follows channels like RapeWaffen.

"RapeWaffen is probably one of the worst White supremacist things that could possibly exist," Heidi Beirich, co-founder, Global Project Against Hate and Extremism, tells Newsy. "This is a Telegram channel, a group of neo-Nazis, essentially, who advocate, for example, the rape of female police officers and share among themselves all kinds of Nazi material. It's very scary."

A spokesperson for the Ohio National Guard tells Newsy Simpson was removed from duty during the protests and is now "being processed for separation.”

Newsy also communicated with Simpson through Facebook after he said the FBI is still in possession of his cellphone. He told us, “I broke stuff related to the conduct of a Soldier so I respect their decision.” He also admitted his allegiances, adding that he attended the 2017 Unite The Right rally in Charlottesville and supports China, Iran, Russia, and North Korea.

"White supremacist groups for years have encouraged their members to get military training," says Beirich. "Learn how to kill. Learn how to build bombs. If you're predicting a coming race war, well, those are the kinds of people that you would want ready to help you fight it."

Simpson’s identity was first confirmed by a website called Unicorn Riot. He’s just the latest member of the military exposed for having a White supremacist ideology. Days before, a private in the Army was indicted for allegedly plotting an attack on his unit in Europe by leaking sensitive information to members of a neo-Nazi group called Order of the Nine Angles.

"The problem is entirely about right-wing extremism and racial extremism," Beirich says.

Defense Secretary Mark Esper said last year he didn’t believe White supremacy was an issue in the military. But a 2019 Newsy-Bellingcat report found active members of the military in a neo-Nazi forum, and a survey by the Military Times found more than one-third of active-duty troops personally saw examples of White nationalism.

Civil rights groups are calling for more regulation of the enlistee screening process, especially after the Republican-controlled Senate removed the term "White nationalist” from the National Defense Authorization Act.

Measures for Congress to consider include screening of social media before soldiers are recruited and a potential tattoo database to identify symbols of White nationalist groups.

"We just can't be training up these people to be better at killing people of color," says Beirich.