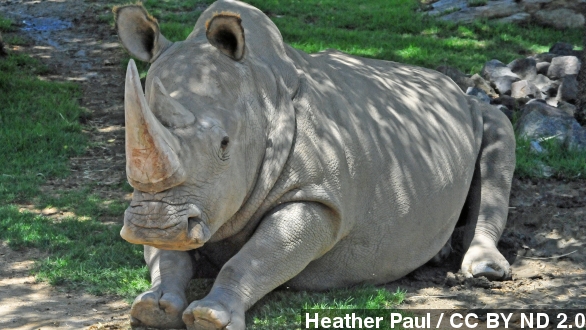 As of last Thursday, there were seven northern white rhinos left in the world.

Come Friday, there were only six. Suni, a northern white rhino at a conservancy in Kenya, died.

The conservancy released a statement announcing Suni's death, saying the rhino didn't die at the hands of a poacher.

The International Rhino Foundation says white rhinos can live to be up to 50 years old.

And with Suni being one of only two breeding males, the outlook for the subspecies looks grim. The rhino's death was reported using pretty stark language.

KGTV: "One of the most endangered species in the world is one step closer to total extinction ... the rhino that died was one of just two breeding-aged males, making extinction even more likely."

CBS: "One step closer to extinction ... there are only six of these animals left on Earth."

Euronews: "Experts warn that a rare northern white rhino is closer than ever to extinction."

Although the press release from the conservancy, says the species "stands at the brink of complete extinction," it also said it will continue to breed the three located there, in hopes of one day having a successful pregnancy.

On the bright side, its cousin — the Southern White Rhinoceros — is thriving, having been brought back from near extinction a century ago, to now number close to 20,000.

The conservancy website says "excessive hunting" largely depleted the white rhinos, and there aren't believed to be any left in the wild.

This video includes an image from Heather Paul / CC BY ND 2.0.