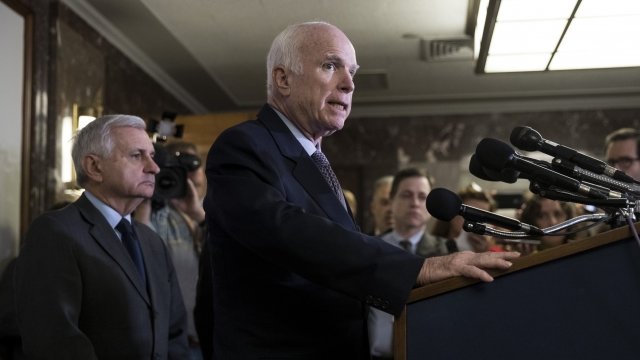 "I'm not going to validate a leak, one way or the other, out of an internal staff meeting," Sanders said.

"I'm not going to get into a back-and-forth, because people want to create issues of leaked staff meetings," Sanders said.

The aide's alleged remark, first reported by The Hill, prompted a wave of criticism. Some, including House Speaker Paul Ryan and former Vice President Joe Biden, called the senator a war hero and said he deserves respect.

President Trump has made critical statements about McCain's military service before. And McCain hasn't been afraid to disagree with his fellow Republicans on policy items, including casting a dramatic no vote against the Obamacare repeal.

A reporter even asked Sanders whether a tone set "from the top" prompted the aide's statement.

"There is not a tone set here. We have a respect for all Americans, and that is what we try to put forward in everything we do, both in word and in action," Sanders said.