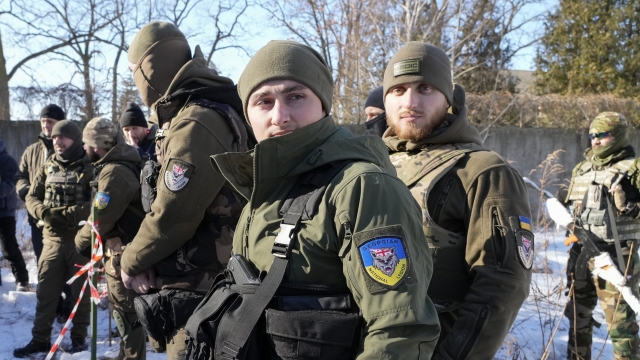 There are roughly 30,000 Americans in Ukraine, and now the White House is urging them to get out as soon as possible.

"I think what we’re encouraging American citizens to do is depart now," White House Press Secretary Jen Psaki said."Obviously, there hasn't been an invasion, and we don’t know that there has been a decision to invade. Obviously, we have a range of diplomatic presences, not only in Ukraine, but in neighboring countries that are always available for a U.S. citizen should they need assistance."

According to two officials, if Russia invades Ukraine, the White House has approved using thousands of U.S. troops in Poland to help those Americans evacuate. But Pentagon spokesman John Kirby says troops will not be used in this manner.

"There is no active planning going on for what we would call a non-combatant evacuation in Ukraine," Kirby said. "There is plenty of time for Americans living in Ukraine to leave Ukraine. Certainly, the State Department has made it clear, they don't want Americans to go to Ukraine right now."

The State Department also continues to emphasize the U.S. is committed to defending Ukraine.

"If Russia chooses to renew its aggression against Ukraine, we've made clear, not just us, but countries throughout Europe and even beyond that there'll be massive consequences," Secretary of State Antony Blinken said. "So my hope is that Russia will be deterred by the actions that we've taken to bring together many, many countries that stand against renewed aggression by Russia and Ukraine."

The U.S. forces are not currently authorized to enter Ukraine, but according to the two defense officials there is a plan for 82nd Airborne Division troops to set up processing areas and temporary shelters inside Poland near Ukraine's border.

The facilities have not been built yet but will start to be as more U.S. troops arrive in Poland.