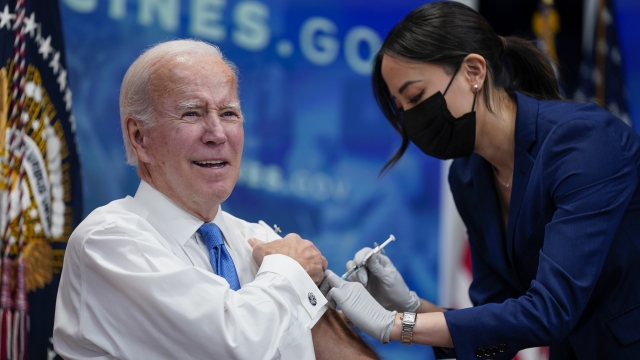 It’s been almost two months since the new boosters were approved but less than 10% of adults have gotten the new doses.

President Joe Biden rolled up his sleeve again Tuesday and received his second COVID-19 booster. The president took the new bivalent vaccine, which targets both the BA.4 and BA.5 Omicron variants — three months after contracting the virus himself.

And he urged more Americans to get the new jabs.

"Virtually every COVID death in America is preventable. Almost everyone who will die from COVID this year will not be updated on their shots," said President Biden.

Only 20 million people have gotten the new doses so far.

"It's been very unsuccessful if we look at the target population for this vaccine, and who's actually received it," said Dr. Amesh Adalja, a senior scholar at Johns Hopkins Bloomberg School of Public Health.

According to CDC data, just 48% of people over 65 and 40% of people over 50 who received the first booster have gotten a second boost. Public health experts said the low uptake could be due to poor messaging around the value of the new boosters. A recent Kaiser Family Foundation survey found that 61% of adults over 65 say that have heard a lot or some about the new vaccines.

Some Americans who got the new shots said they are excited about the idea of targeting the vaccine to the variants circulating now.

Even fewer, 53%, of adults between 50 and 64 said the same. And experts say the president’s own admission last month that the pandemic is “over,” has worsened general apathy around the vaccines.

Although the science is still out on how effective the new shots are at preventing infection, Dr. Adalja said what’s more important is that they provide increased protection against serious illness and death.

"I would avoid the whole idea of trying to understand what the efficacy is against infection and for how long and just say, if you're high risk, you need to be boosted, because this is still a serious illness to you," said Adalja.

"New variants may make some existing protections ineffective for the immunocompromised. You may be at increased risk this winter," said President Biden.

The centers for Medicare and Medicaid services will also reach out to seniors directly via email and phone.

The president renewed his calls for business, school and local leaders to encourage their communities to get the updated vaccines.