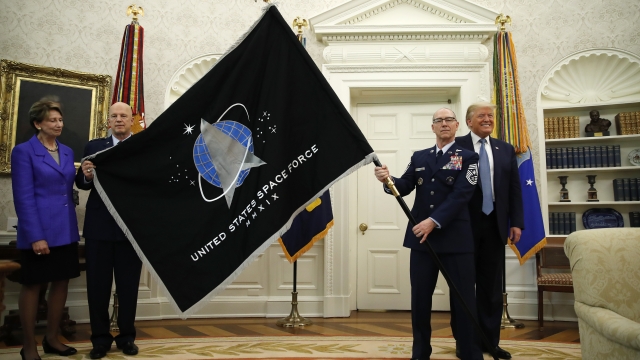 The official U.S. Space Force flag was unveiled for the first time during an Oval Office ceremony on Friday.

According to Gen. John Raymond, the Space Force's first chief of space operations, the delta wing on the flag "is a symbol the space community has used for years," while the North Star represents the branch's "core value." The elliptical orbit around the globe, he says, "signifies the space capabilities that fuel our American way of life and our American way of war."

During Friday's ceremony, President Donald Trump also revealed the U.S. is working on what he called "the super-duper missile."

"And I heard the other night 17 times faster than what they have right now. Then you take the fastest missile we have right now," President Trump said. "You've heard Russia has five times and China is working on five or six times. We have one 17 times. And it's just gotten the go-ahead."