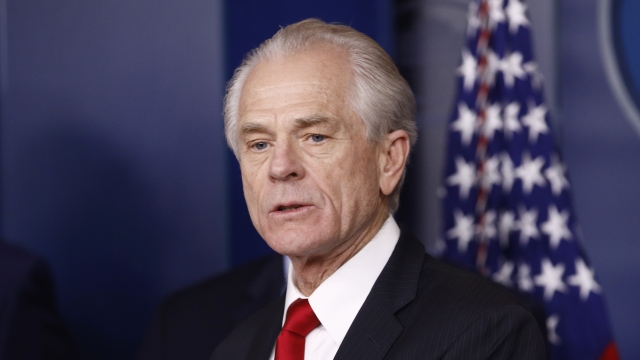 "We're engaged in what is the beginning stages of the biggest industrial mobilization we've had since World War II," said White House trade adviser Peter Navarro.

Despite calls from both Democrats and Republicans to use the Defense Production Act, White House trade adviser Peter Navarro says the Trump administration has been reluctant to do that because companies are stepping up voluntarily.

"I use it every day as leverage. Ninety-nine percent of the time, when I call a company, they're like, 'We'll do whatever you ask us to do.' If there's a case where maybe a company is hesitant, they know that DPA is hanging back there. So we'll use it explicitly when we need to, but right now the tremendous outpouring of effort from American enterprise has been overwhelming, and everything is moving the way it should," said Navarro.

"This idea that the Defense Production Act he talks about and has signed, he doesn't want to dictate to companies, these are things we need now, now. Not tomorrow, not yesterday, but a month ago. But the president is not acting," said Biden. "I don't care if the president's numbers are going up or down. I know, along with everybody who has ever dealt with those kinds of things, as we did in our administration, that time is of the essence. Time is of the essence."

And New York Gov. Andrew Cuomo, another Democrat, demanded the White House take action to send ventilators to his state, one of the epicenters of the virus, during a recent press briefing.

Navarro says the White House is working with companies of all sizes to alleviate the shortages of life-saving equipment.

"The power of private enterprise right now, as we’re mobilizing through this great voluntary effort, is using all of these market mechanisms to much more efficiently get the job done," said Navarro. "We're not the Soviet Union. I can't sit here and say, 'You do this, you do this.' There's tens of thousands of companies out there moving millions of pieces of PPE every day. No, the DPA should only be used like a laser beam when there's a raw material we need to produce a goggle or a mask or whatever."