White House: Trump Was Right To Blame 'Both Sides' For Charlottesville 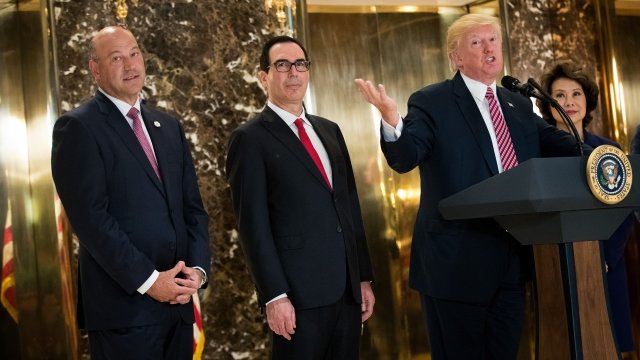 A White House memo reportedly said President Trump was "entirely correct" to blame "both sides" for the violence in Charlottesville.

The White House is defending President Donald Trump's controversial comments on the violence in Charlottesville, Virginia.

Just hours after Trump blamed both counterprotesters and protesters with the so-called alt-right for the deadly rally, the White House communications office reportedly sent a memo to Republican members of Congress.

According to media outlets that got a copy of it, the White House said Trump was "entirely correct" in saying "both sides of the violence in Charlottesville acted inappropriately, and bear some responsibility."

White power protests feature a panoply of signs and symbols — some of which can be pretty obscure.

"We condemn in the strongest possible terms this egregious display of hatred, bigotry and violence on many sides, on many sides," Trump said.

Criticism after his comments Saturday and Tuesday was swift. Lawmakers from both sides of the aisle condemned Trump for equating the actions of counterprotesters and white nationalists, white supremacists or neo-Nazis.

"This is terrible. The president of the United States needs to condemn these kinds of hate groups," Ohio Gov. John Kasich said.

The organizers of events which inspired & led to #charlottesvilleterroristattack are 100% to blame for a number of reasons. 1/6

The President of the United States just defended neo-Nazis and blamed those who condemn their racism and hate. This is sick.

The violence in Charlottesville left at least one person dead and several others injured.