White House In Favor Of Women Registering For Draft 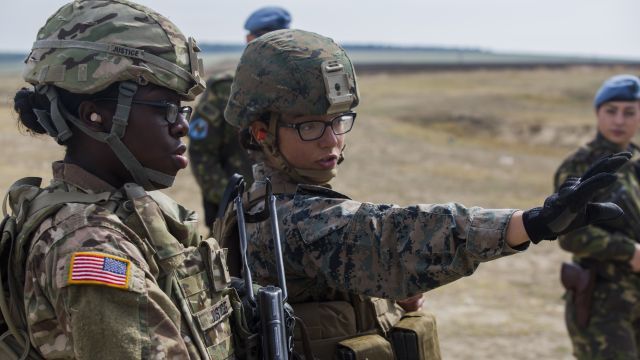 SMS
White House In Favor Of Women Registering For Draft
By Matt Picht
By Matt Picht
December 1, 2016
Both the White House and the Pentagon say the Selective Service System should register eligible women for a potential military draft.
SHOW TRANSCRIPT

For what it's worth, the Obama administration officially supports requiring women to sign up for the draft.

Representatives from the White House and the Pentagon both confirmed Thursday that the Selective Service System should register all eligible applicants — men and women — as potential conscripts for a military draft.

SEE MORE: How 'Weak' Is The US Military?

National Security Council spokesman Ned Price said, "As old barriers for military service are being removed, the administration supports — as a logical next step — women registering for the Selective Service." And Pentagon spokesman Peter Cook said, "It makes sense for women to register for Selective Service just as men must."

Currently, the Selective Service System registers men between the ages of 18 and 25 for potential military service. The agency notes that "if given the mission and modest additional resources, [it] is capable of registering and drafting women with its existing infrastructure."

But there's no telling if President-elect Donald Trump will uphold that position once he takes office.

A recent attempt in Congress to require universal draft registration was stripped out of the bill it was attached to amid objections from some conservatives.

Instead, the finished bill includes a provision to study the cost-effectiveness of the entire Selective Service System.

And even if a plan to draft women does make it into law, the U.S. military has been made up entirely of volunteers for more than 40 years.

Last year, Defense Secretary Ash Carter struck down a ban on women serving in combat roles. That's another policy decision that might be up in the air under the incoming Trump administration.