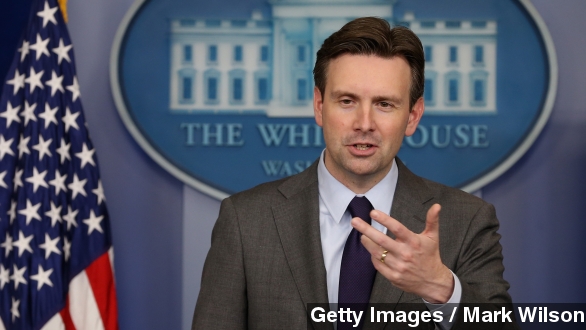 SMS
White House Sorry For Paris No-Show, But France Doesn't Mind
By Jay Strubberg
By Jay Strubberg
January 12, 2015
The White House switched gears and admitted it made a mistake by not sending a high-ranking U.S. official to Sunday's unity rally in Paris.
SHOW TRANSCRIPT

The White House switched gears Monday and admitted it made a mistake by not sending a high-ranking U.S. official to Sunday's unity rally in Paris.

Dozens of foreign dignitaries from across the globe — including German Chancellor Angela Merkel and Israeli Prime Minister Benjamin Netanyahu — marched arm-in-arm in the streets of Paris during the march. (Video via RT)

The absence of any top U.S. official was notable, and the Obama administration got a lot of criticism for not appearing in the march to support America's oldest ally.

In a op-ed piece for Time, Senator Ted Cruz said, "The absence is symbolic of the lack of American leadership on the world stage, and it is dangerous."

Attorney General Eric Holder received perhaps the brunt of the criticism, as he was actually in Paris while the rally was happening but opted not to go.

The administration had originally defended the no-shows, saying busy schedules made it difficult for Obama or Biden to attend, and the security challenges were considerable. (Video via The White House)

Despite all the criticism, the French Ambassador to the U.S. told MSNBC his government has felt plenty of support from the White House.

"The first impression we have had is support expressed by President Obama. As I said, he came to the Embassy, he made several declarations. Secretary Kerry made a speech. ... From the French side there is absolutely no hard feelings."