Cutting Funding For UN Agencies Could Actually Hurt The US 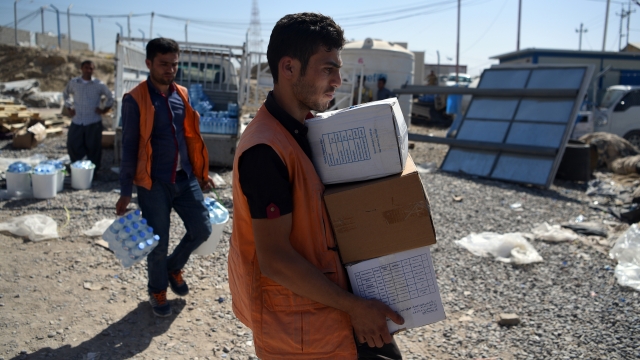 SMS
Cutting Funding For UN Agencies Could Actually Hurt The US
By Melissa Prax
By Melissa Prax
April 25, 2017
The Trump administration has already made cuts to the United Nations Population Fund, but more agencies could see cuts.
SHOW TRANSCRIPT

The U.S. plans to cut deep into its funding for the United Nations — but that move could end up costing more in the long run.

"The amount that could really be saved is a speck compared with overall U.S. spending," says Richard Gowan, senior policy fellow for the European Council on Foreign Relations.

Three experts told Newsy why it's actually in the U.S.' national interest to continue its historically strong support for the United Nations.

For starters, the U.N. helps the United States save on military costs. By using U.N. peacekeepers, the U.S. often doesn't have to put its own military on the ground for missions in some of the world's most dangerous conflicts.

"Peacekeepers are much less costlier because states share the burden," says Bryce Reeder, a political science professor at the University of Missouri. "It's not one actor; it's all these actors coming together."

"But even at a broader level, the United Nations provides for security in very important regions around the world where American soldiers are already deployed," says Peter Yeo, who's with the Better World Campaign and the United Nations Foundation. "So we've got to have the U.N. working in partnership with United States and the U.S. military to advance our objectives."

One of those objectives is keeping countries outside the U.S. stable, which likely means fewer issues in the long run.

"One thing about conflict is, conflicts recur. ... I’m actually one that would argue that aid agencies and that sort of efforts need to be present for a significant period of time to prevent a relapse," Reeder says.

And where there are conflicts, there are people fleeing those conflicts. Gowan says the best approach is having the U.N. help refugees in regions where they originally lived, like Africa and the Middle East.

"If the U.N. was not there, that would mean more people trying to get into Europe and there would be more demands for the U.S. to take in refugees," Gowan says.

The Trump administration has not been a fan of refugee resettlement. An executive order from the president aims to cut the resettlement numbers in the U.S. by 50 percent. It got tied up in court.

"Ultimately, the way to keep young people out of ISIS is to ensure that they have hope and opportunity," Yeo says. "... The United Nations, in partnership with the U.S. foreign aid program, is a crucial element in providing that type of hope — to create jobs, it makes sure kids can stay in school."

Other world powers might also move to fill in the gaps created by U.S. funding cuts to the U.N.

"That means countries like China and Russia, which don't necessarily share our viewpoints about global issues, will fill the gap," Yeo says.

Of course the U.N. has its fair share of issues that need to be addressed, but it has a reach that's hard to compete with.

And there's some skepticism if Congress will actually approve the cuts.

"It's dead on arrival," Sen. Lindsay Graham told reporters in February. "It's not going to happen. It would be a disaster. If you take soft power off the table, then you're never going to win the war."

A bill introduced in the House in January aims to have the U.S. pull out of the U.N. completely. But since then, not much has happened with it.

Trump's budget is still being hammered out, but some cuts have already happened. In April, the U.S. eliminated its funding for the U.N. Population Fund. That affects women in over 150 countries.

As for the peacekeeping funding, 2017's budget expires in June.

It could be months before Congress actually decides on what other U.N. agencies may see a cut.