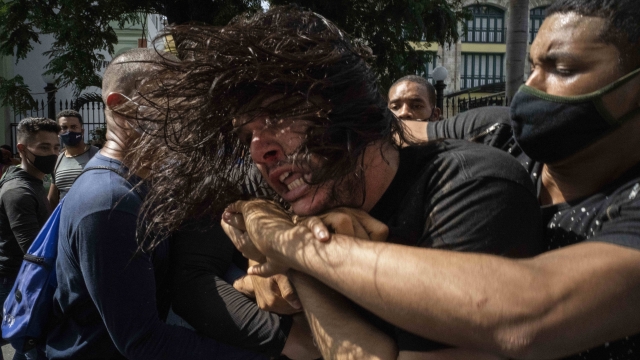 Thousands of Cubans have protested against long-standing shortages and communist rule. President Biden says "We stand with the Cuban people."

Calls for liberty and freedom in Miami now magnify the sounds of protest, just 220 miles away. Where thousands are marching through the island’s streets, the largest protest in decades.

Cubans are angry at the country’s government.

Cuba's military and police have been ordered to fight, launch tear gas and arrest protesters. While government supporters have injured some protesters and journalists.

Protesters say they’re fed up with long-standing shortages in food, medicine and electricity, now made worse by the pandemic.

Cuba developed its own Coronavirus vaccine, a three-dose shot with a 92% efficacy rate, according to Cuban health regulators. But production hasn’t matched demand.

COVID-19 cases in Cuba have surged, with variants driving the rise, to more than 6,000 new cases per day.

This COVID patient, whose face is blurred for safety, received this bowl of bread and a yogurt. Their lunch for the day.

Newsy also obtained photos of some elderly folks receiving their first shots at home, but that service isn’t widespread.

About a tenth of Cuba’s 11 million people are fully vaccinated, according to Cuban officials.

"The electricity was gone off more than twenty times yesterday."

"Love, it's because we don't have fuel and have had to cut the electricity."

Diaz-Canel blames U.S. sanctions, or a blockade, as Cubans call it, for the lack of resources.

For the 29th straight year, the U.N. General assembly called on the U.S. to end the embargo, but critics of the Cuban government say the real problem is inefficiency.

President Biden signaling the same sentiment., saying in a statement “The United States calls on the Cuban regime to hear their people and serve their needs at this vital moment rather than enriching themselves.”

As a candidate Biden promised to reverse some Trump-era measures that in his words "have inflicted harm on the Cuban people and done nothing to advance democracy and human rights."

Florida senators Marco Rubio and Rick Scott now urging the president against lifting sanctions. Scott even saying in a statement “there must be consequences for this heinous oppression and attacks on peaceful protesters.”

The Biden administration is now reviewing its policy as Cubans suffer.