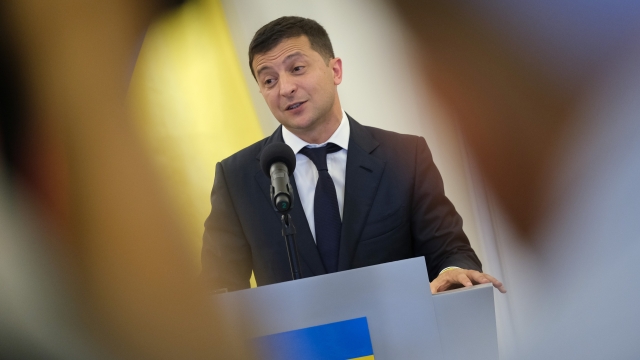 The White House has released the highly-anticipated notes from a phone conversation between President Donald Trump and Ukrainian President Volodymyr Zelensky.

Experts have said this is normal. The White House doesn't record conversations for security purposes.

So, let's get to the meat of the controversial conversation. President Trump asked Zelensky to "do us a favor," and later asked that Zelensky look into Joe Biden's son. The U.S. president said something along the lines of: "There's a lot of talk about Biden's son, that Biden stopped the prosecution and a lot of people want to find out about that so whatever you can do with the Attorney General would be great. Biden went around bragging that he stopped the prosecution so if you can look into it. ... It sounds horrible to me."

President Trump later said he would ask his personal attorney Rudy Giuliani and Attorney General William Barr to call Zelensky to "get to the bottom of it," but it's not clear what he's referring to.

Ok. So here's some background: Hunter Biden had business interests in Ukraine around the time when Joe Biden, in his role as vice president, urged the country to fire its chief prosecutor. President Trump has claimed that prosecutor was investigating a company Hunter Biden was involved in.

Previous reports said President Trump asked Zelensky "about eight times" during the phone call to work with Giuliani to investigate Biden's son. The memo the White House sent out only mentioned the request once. This could be because the 30-minute phone call on July 25 was condensed — it only took up five pages.

President Trump tweeted when the memo was released: "Will the Democrats apologize after seeing what was said on the call with the Ukrainian President? They should, a perfect call — got them by surprise!"