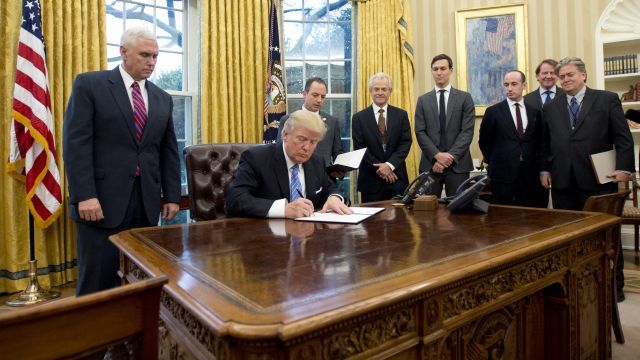 SMS
The White House Just Released Financial Disclosures Of Trump's Staff
By Tyler Adkisson
By Tyler Adkisson
April 1, 2017
The personal financial statements for some staffers in Trump's administration give a snapshot of their economic ties and wealth.
SHOW TRANSCRIPT

The documents show the personal assets staffers had when they started working at the White House — that's before some divested holdings or resigned from positions that could be seen as conflicts of interest.

Most of the filings aren't surprising: They confirm many of Trump's closest advisers are well-off.

Senior adviser Steve Bannon earned somewhere between $1.3 million to $2.3 million last year. About $190,000 came from consulting fees for Breitbart, roughly $125,000 was from a data firm that worked for the Trump campaign and about $60,000 came from a conservative nonprofit organization.

Both Trump's daughter and son-in-law — Ivanka Trump and Jared Kushner — reported assets valued between $240 million to $740 million, which includes a stake Ivanka holds in Trump International Hotel in Washington, D.C.

The documents also show that Kushner resigned or divested from more than 260 positions at various organizations, some of which operated parts of his family's real estate business. He'll remain a beneficiary for most of those businesses.

Kellyanne Conway's filing shows she made over $800,000 last year through her consulting firm, whose clients include the National Rifle Association and the Tea Party Patriots.

And White House press secretary Sean Spicer disclosed he made $260,000 as chief strategist and communications director for the Republican National Committee.

President Donald Trump and Vice President Mike Pence weren't in the release, but because they are elected officials, they will have to disclose their finances eventually.

Trump also was required to disclose his finances last year during the presidential campaign. That filing showed at least $1.5 billion in assets and over $600 million in annual income.