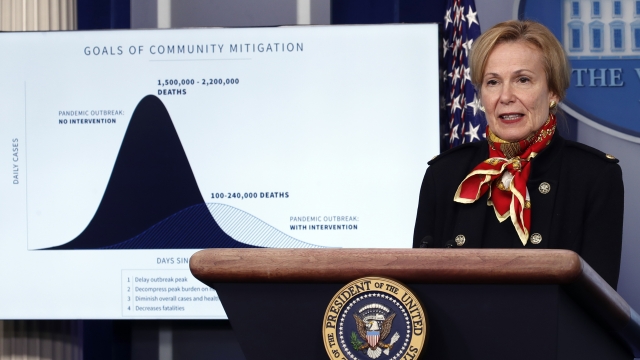 SMS
White House Predicts Up To 240,000 In U.S. Could Die From Coronavirus
By Meg Hilling
By Meg Hilling
April 1, 2020
The U.S. has the highest number of documented cases in the world.
SHOW TRANSCRIPT

White House officials say they're anticipating the U.S. death toll from the coronavirus will reach between 100,000 and 240,000 in the weeks ahead.

"As sobering a number as that is, we should be prepared for it," said Dr. Anthony Fauci, Director of the National Institutes of Allergy and Infectious Diseases.

The number of confirmed coronavirus cases continues to climb globally, and the U.S. leads with the highest number of documented cases, according to Johns Hopkins University.

"This is going to be a rough two-week period," President Trump said.

Despite the grim prediction, White House officials say continued mitigation efforts could help prevent the death toll from climbing that high. President Trump announced that he would be extending his administration's social distancing guidelines until April 30. Under those guidelines, elderly people are urged to stay home and all Americans are advised to avoid gatherings of more than 10 people.

"Is it going to be that much? I hope not and I think the more we push on the mitigation, the less likelihood it would be that number. But as being realistic, we need to prepare ourselves that that is a possibility, that that’s what we will see," Fauci said.