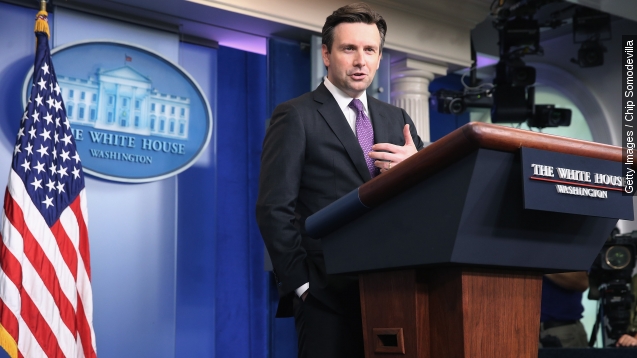 SMS
White House Plays Down Trade Agenda Setback In House
By Christian Bryant
By Christian Bryant
June 12, 2015
A portion of the Obama-backed trade deal failed to pass in the House Friday, after receiving insufficient support from House Democrats.
SHOW TRANSCRIPT

The U.S. House of Representatives voted down part of President Obama's trade deal Friday, in what some are calling a significant defeat for the president's trade agenda. But The White House sees it a bit differently.

"To the surprise of very few, another procedural snafu has emerged. These kinds of entanglements are endemic to the House of Representatives," White House Press Secretary Josh Earnest said.

The House voted against a program that would've provided assistance to workers displaced by global trade, but approved Obama's fast-track authority, which would give him the power to complete a trade deal with Pacific-Rim countries. The problem: one can't move forward without the other.

"We all know we want to engage with trade promotion and the rest of that, but we have to slow down because it is not ... whatever the deal is with other countries, we want a better deal for America's workers," House Minority Leader Nancy Pelosi said.

And the president's defeat came at the hands of House Democrats, like House Minority Leader Nancy Pelosi.

What's worse is that Obama made a trip to the U.S. Capitol to appeal for support earlier Friday morning — to no avail, apparently. The measure lacked the support of House Democrats. Had the House passed both measures, Obama would've been able to move forward with negotiations on the Trans-Pacific Partnership, or TPP, a massive free-trade deal.

House GOP leaders could try to pass the failed measure as soon as next week, but without a shift in Democratic support, we could see the same kind of outcome.