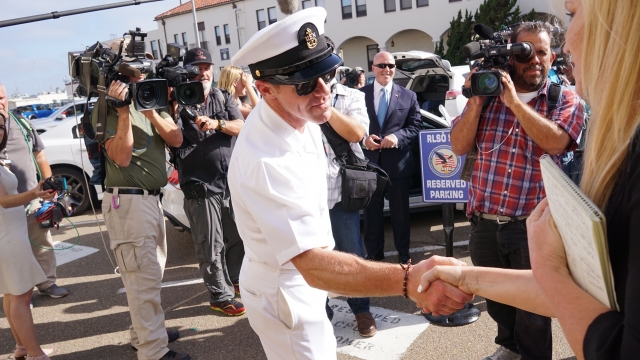 Gallagher had been sentenced to four months' confinement and a demotion in rank, but earlier this month President Trump restored his rank.

The White House notified the Navy that it can continue its plan to expel Navy SEAL Edward Gallagher from the special operations force, a senior Navy official told the Associated Press on Sunday.

The clarification comes after President Trump tweeted Thursday, "The Navy will NOT be taking away Warfighter and Navy Seal Eddie Gallagher’s Trident Pin," adding, "This case was handled very badly from the beginning."

The Trident pin is a symbol of an official Navy SEAL. The Navy notified Gallagher in a letter Wednesday that a review board will look into whether to pull his SEAL status.

Back in July, Gallagher was acquitted of war crimes and the murder of an ISIS prisoner but was found guilty of posing for pictures with the prisoner's dead body. He was sentenced to four months' confinement as well as a demotion in rank.

But earlier this month, President Trump restored Gallagher's rank of chief petty officer, against the Pentagon's recommendation to not interfere.

Despite the assurances from the White House that it won't intervene, the president technically still has the power to step in.

News outlets reported Saturday that Navy Secretary Richard Spencer threatened to resign if President Donald Trump interfered in the war crimes case of Edward Gallagher. Later that day, Spencer denied the report, saying he'd comply with any order from the president. He said he needs a formal order to change course, but doesn't consider a tweet to be a formal order.