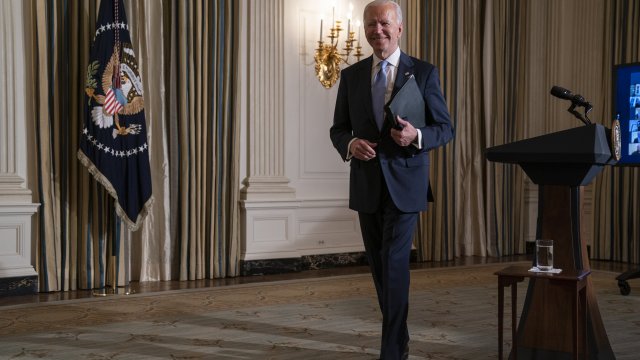 SMS
White House Looks For Bipartisan Support On COVID Relief
By Newsy Staff
By Newsy Staff
January 21, 2021
Democrats aren't worried about getting a relief bill through the house.
SHOW TRANSCRIPT

Well, the president can't govern on executive actions alone so at the time of his legitimative agenda another round of coronavirus relief. Austin Kim is here to look at the negotiations. Austin, good morning. Where do things stand on negotiations right now?

We can expect the activity to pick up very soon, Alex. White House Press Secretary Jen Psaki said the president will be heavily involved in negotiations with congressional leaders. Democrats aren't worried about getting a relief bill through the house. It's the Senate they are worried about because they have a very slim majority and they're going to need Republican support if they want to pass some sort of coronavirus relief. President Biden released his plan last week. It calls for stimulus payments, there's also room there for unemployment aid, but the big number that sticks out especially if you are a Republican is that $1.9 trillion prize tag. Republicans have said on the record that it is way too expensive and even the white house said that number is not necessarily set in stone and Democrats will have to negotiate.

"This is a discussion. It's a conversation. And he is no stranger to the process of build making so we're at the beginning of the process and as we continue there will be conversations with members of both parties of what will be in a final package and rarely does it look exactly like the initial package that is proposed." -Said Psaki

So if Democrats can't get that Republican support there is one way they can get some elements of the coronavirus relieve through and that's called budget reckon silliation. I don't want to boar you with all the details but they can get some of the more controversial parts through with a simple majority. The White House says all options are on the table in that regard but their first preference is to negotiate with the Republicans.