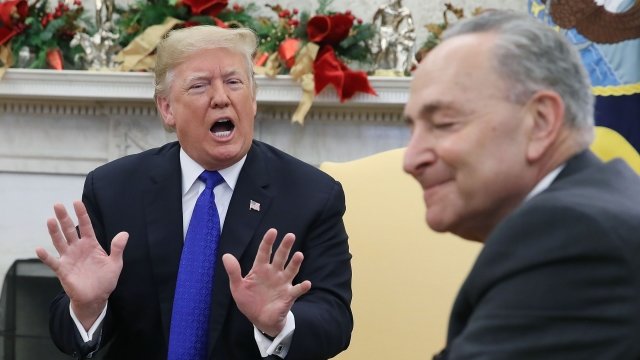 By Stephanie Liebergen
December 18, 2018
The Trump administration was demanding $5 billion for a border wall, but now it says it's considering other funding options.
SHOW TRANSCRIPT

"You know what I'll say: Yes, if we don't get what we want, one way or the other — whether it's through you, through a military, through anyone you want to call — I will shut down the government. Absolutely," Trump said on Dec. 11.

It looks like the Trump administration is backing away from its hardline demand for border wall funding.

Congress has to pass a new budget by midnight Friday to avoid a government shutdown, and President Donald Trump has been demanding that legislation include $5 billion for a border wall.

But press secretary Sarah Sanders said Tuesday that the White House is looking at other sources for that money. She said all government agencies have been asked to look for funding that could be redirected to border security.

As for the fate of any budget bill, the White House is withholding its opinion until there's actual legislation to consider.

"We want to see what the Senate can pass. They've thrown out a lot of ideas. They've yet to take a vote. Once they do that ... . We're disappointed in the process and their inability to put something forward. Once they make a decision and they put something on the table, we'll make a determination on whether or not we'll move forward," Sanders said.