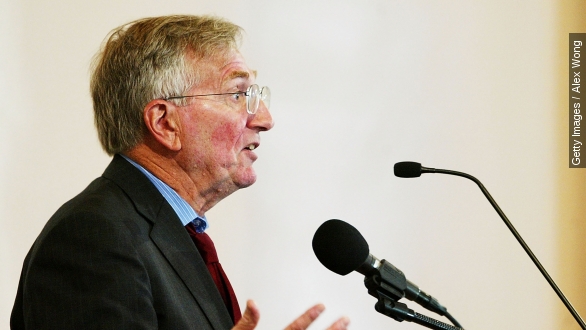 In 2011, President Obama announced "The United States has conducted an operation that killed Osama bin Laden, the leader of Al-Qaeda."

The killing of Osama bin Laden has been hailed as one of the Obama administration's greatest foreign policy triumphs — but a new report alleges the administration's been lying about crucial details of the raid for years.

That's if you believe the work of veteran investigative journalist Seymour Hersh, who published an extensive essay in the London Review of Books, which outlines an alternate history of bin Laden's death.

Hersh's account contradicts the official story in many ways; he asserts bin Laden was a captive of the Pakistani intelligence service when he was killed, and that Pakistan and the U.S. orchestrated the raid together — a collaboration President Obama betrayed when he went public with bin Laden's death.

If true, the report would be another bombshell revelation from Hersh, who cemented his reputation with investigations into the My Lai massacre in 1969 and the Abu Ghraib detainee abuse scandal in 2004.

CBS's Michael Morell said, "The source that Hersh talked to has no idea what he's talking about."

Arizona Sen. John McCain told MSNBC, "I simply have never heard of anything like this, and I've been briefed several times."

But they almost needn't have bothered. Journalists from many different outlets were picking apart Hersh's account and labeling it a conspiracy theory before the official denials began to surface.

"On the SEAL side, you have that they were training for a raid that you say they didn't need to do. Why were they training so hard? You have it in Utah, but it was supposedly in Nevada, and you have the SEALs telling such a different account. They would all have to be lying for what you're saying to be true."

Most of the criticism of Hersh's work comes from his repeated citation of a single, anonymous source whose role within the actual mission is vaguely defined. The report has also drawn fire for contradicting established facts and relying on what critics call implausible conclusions.

Some of the criticism has come from reporters whose work backs up the official story. CNN's Peter Bergen, who visited the compound and witnessed evidence of a firefight, calls Hersh's story — which denies the firefight ever happened — "a farrago of nonsense." (Video via Johns Hopkins University)

Hersh does have his defenders, however, most notably The Intercept's Glenn Greenwald, who criticized journalists for mocking Hersh's claims while swallowing the administration's initial story of the raid — some of which was later walked back.

Hersh has published previous exposés for the London Review of Books on the use of sarin gas in Syria, as well as Turkey's involvement in the conflict, which have also been met with skepticism.

This video includes images from Getty Images and Institute for Policy Studies / CC BY 2.0.